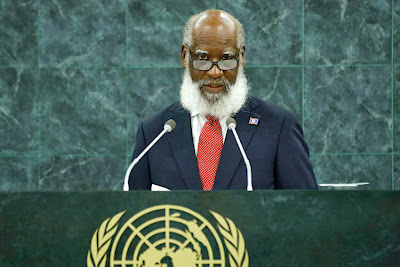 Foreign Minister Wilfred Elrington of Belize. UN Photo/Paulo Filgueiras
30 September 2013 – Developed nations have not honoured their commitments to provide the assistance poor countries need to achieve the global anti-poverty targets known as the Millennium Development Goals (MDGs), the Foreign Minister of Belize told United Nations Member States today, stressing that the future development agenda must not suffer the same fate.
Agreed by world leaders at a UN summit in 2000, the MDGs set specific goals on poverty alleviation, education, gender equality, child and maternal health, environmental stability, HIV/AIDS reduction, and a global partnership for development.
“It is evident that for some inexplicable reason, the developed countries abandoned goal 8,” Wilfred P. Elrington told the General Assembly’s high-level debate, referring to the MDG on a global partnership for development.
“We note with disappointment, that the rich countries have not even been able to bring themselves to honour their commitment to contribute even the 0.7 per cent of their gross domestic product as official domestic assistance to poor countries,” he said.
Continue Here:
Posted by Linda Crawford at 1:43 AM

This man is so cleaver in the way he begs from the rich countries. Begging the Belize way!

And when will the corruption in Belize stop?!