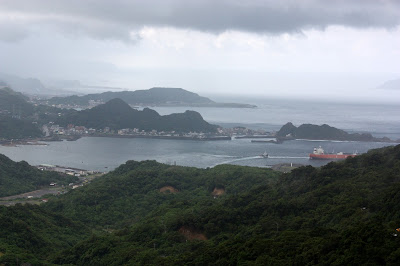 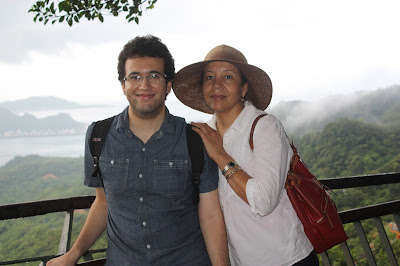 This past weekend we took a break from the hustle and bustle of Taipei and went to the northeastern mountains of Taiwan, to the Ruifang District.

We arrived at Jiufen to a pouring rain, but that didn't stop us from enjoying the spectacular town on the mountains overlooking the Pacific Ocean.

Recommendations to go to this town came from my Taiwanese friend, Christine, who was born and raised on these beautiful mountains. Jiufen used to be a gold mining town in the 1800's and when gold was struck the village went from 9 families to over 4000. But with the decline of gold mining, Juifen stopped growing.

In 1989 the movie, "A City Of Sadness", directed by Taiwanese director, Hou Hsiao-hsien was shot in the village and that brought the village back from decline. The movie was the first Taiwanese film to win the Golden Lion award at the Venice Film Festival. It tells the story of the Kuomintang (KMT's) authoritarian misdeeds after it's 1945 handover of Taiwan from Japan, and was the first Taiwanese film to depict the 228 incident of 1947 in which thousands of people were massacred.

Today Jiufen is also know for its beautiful panoramic vistas, including the famous shopping street, "Jiushan", which has shops and restaurants packed closely together from one end of the village main street to the other.

At the end of the village street is the "Jiufen Tea House". By the time we found the place I was dead tired and ready for some good tea, but low and behold, we had to wait about 30 minutes for a seat. The waiter asked if we wanted to be seated outside overlooking the bay, but it was still drizzling and I opted for a booth inside. I can just imagine the view outside on a gorgeous day.

In the middle of our table is a built in fire hearth with the tea kettle slowly boiling. We were seated on cushions on the floor and the waitress brought the menu that had some very interesting teas listed, some I have never tasted before. We ended up trying an Alishan high mountain oolong which the waitress told us was hand picked high on the fog-covered mountain plantations. 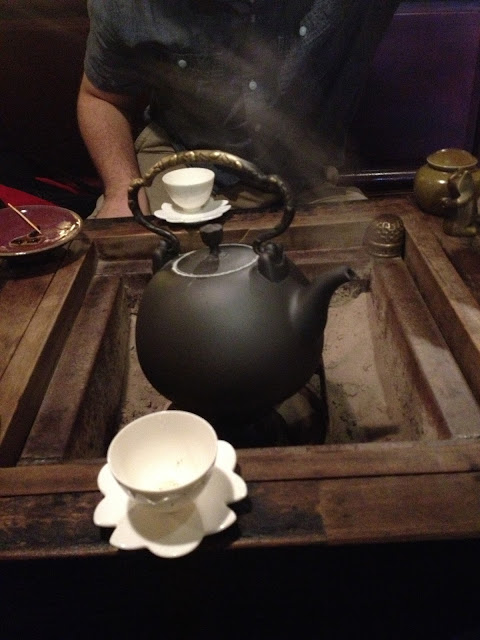 Fire Hearth in the middle of the table 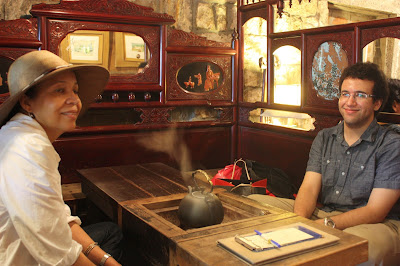 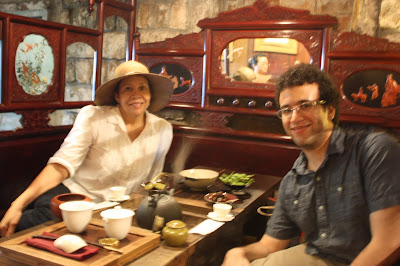 A few minutes after our selection the waitress, or rather the tea expert, came back with the tea and tea sets and gave us a demonstration on how to brew the perfect cup of our selection. The demonstration led to a great tea learning experience on how long to brew this type of tea and how many times you can use the same pot of leaves. 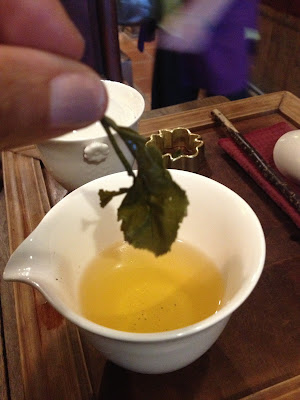 Quality tea leaves - Hand picked and no chemicals
This tea was of the highest quality and the steeped tea had a golden yellow color; the taste was fresh and there was a slightly sweet aftertaste. The tea expert said that the brewing time should be about 20 seconds, done twice, and the leaves should uncurl over time to experience the full flavor. In fact, the tea leaves can be reused and we ended up brewing our own set four more times.

After our tea experience we went out on the balcony to find that the rain had stopped and the most gorgeous view of the mountains and fishermen boats in the harbor was in full effect.

Overall, the tea was great, the environment in the tea house was so beautiful, the reduced sour plums and steamed edamame sprinkled with sesame oil, garlic, and pepper served with our tea added to a wonderful tea experience.

So the next time you are in Taiwan, go to Jiufen; it is fun and remember to stay to see the lights of the bay. 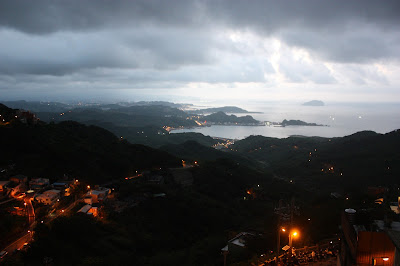 Posted by Linda Crawford at 1:43 AM