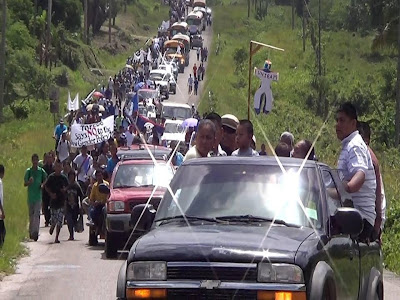 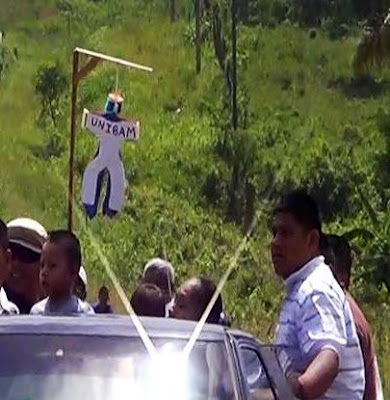 The Minister of Forestry, Fisheries and Sustainable Development, Senator Lisel Alamilla has written a public statement on her Facebook page expressing grave concerns about what she perceives could be the promotion of hate crimes against gay men and women in Belize.

Minister Alamilla posted the statement below along with photos taken during the pro-constitution demonstration in the Toledo District of southern Belize last week. The photos depicts the hanging in effigy of the United Belize Advocacy Movement (UNIBAM).

"I do not oppose persons having different views or religious beliefs but it concerns me immensely when those are being communicated by misinformation, manipulation and fear which could result in hate crime.

Belize is not a melting pot, the Belize that I know is a country where persons of different cultures, ethnic groups, religious beliefs, languages and history come together under one banner and respect diversity. We are a reef people, we are a forest people, we are Belizeans.

The photo that was shared with me, that I am now sharing with you is EXTREMELY concerning and even frightening. Have those persons who are organising the various activities opposing the gender policy & the UNIBAM case crossed the line ? Will they soon be hanging women who dare to be leaders, would they have hanged my son who was disabled, would they hang me because I am mestizo who married a black man, you may say absolutely NOT but tell me then why is it okay for them to have the cardboard cut out of a person, with a noose around its neck and the word UNIBAM written across its back ? Is this not promoting hate, will this not lead to hate crimes ? In fact is it not already increasing the violence against persons who from the LGBT community for their sexual orientation/identity. This is personal for me, my loved ones are at risk and our right to be different is at risk.

As to the UNIBAM case, this is in the courts let the courts decide. As to the gender policy, it not a homosexual policy it is policy that guides how government will protect the rights of ALL its people, that is the responsibility of government."

Posted by Linda Crawford at 8:44 AM