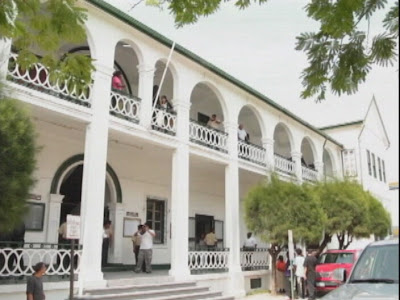 
I entered to an empty court room, now cool and quiet on a beautiful Belize morning.  A beautiful woman comes in alone, sits down in the audience section, clasps her rosary between her two hands and prays silently.  A few minutes later, a priest (I presume; he is wearing a dog collar) then enters and moves toward the the woman.  They embrace. It is clear that this case touches deeply held beliefs on both sides.  But this scene also tells us that there are also deeply held emotions.

Asa DeMatteo, a clinical psychologist living with his same-sex spouse in San Francisco, is blogging from the courtroom in Belize.
Posted by Linda Crawford at 3:54 PM