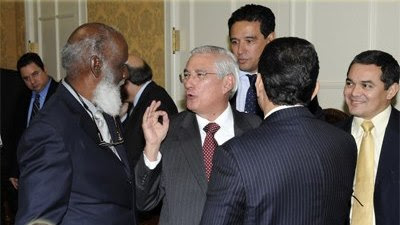 (L) Belize Foreign Minister- Hon Wilfred Elrington
The president of Guatemala Otto Perez Molina says his government will be on alert as a group known as Belize Territorial Volunteers head to the Belize border with Guatemala this weekend to clean the borderline. “We will be vigilant,” Molina told reporters during a visit outside of Guatemala City today.

Wil Maheia and his group plan to go in with machetes to clear the border, but Belizean authorities are against it, saying it could spark an international incident with Guatemala and land Belizeans in jail in Guatemala. Guatemalan authorities, say the planned excursion this weekend is not being helpful of the referendum process.

via Love FM Bz
Posted by Linda Crawford at 11:13 PM