Guatemala Calls On Belize To Restore Its Original Referendum Law 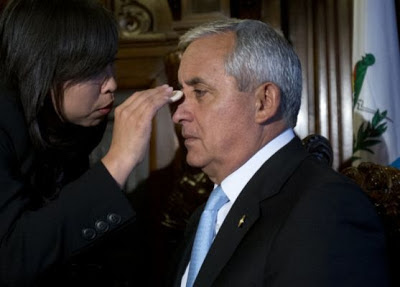 Photo credit: AP | President of Guatemala Otto Perez Molina is makeup prior to an interview with The Associated Press at the Casa de America in Madrid, Spain, on Wednesday, February 13, 2013. The president makes a state visit to Spain. (AP Photo / Paul White)

Guatemalan President Otto Perez Molina says that Belize should restore its referendum law to what it was in 2008 if it wants to save the 6 October 2013 referendum to decide if its territorial claim against Belize should go before the International Court of Justice at The Hague.

Guatemala’s referendum laws provide for a simple majority to decide a plebiscite. This is in sharp contrast with the 60% minimum participation and 51% majority approval high bar that Belize now has in place. The law was changed by the Belize government in 2008 shortly after the United Democratic Party government took office.