I was recently in Japan and never imagined I would be visiting the extreme northern area that was hit by the devastating tsunami on March 11, 2011.

Seventeen months ago a magnitude 9.0 earthquake hit off Japan’s northeast coast triggering devastating 20 meters tsunami waves and a subsequent radiation crisis. Ishinomaki was one of the hardest hit towns along the northeast coast. My friend Netty and I were invited to a concert in the town of Ishinomaki by ARI, the Association for the Revitalization of Ishinomaki to raise awareness for the victims of the tsunami.  The concert was by pianist Takako Mikoshiba and soprano Saori Suzuki and was held at a local community center. 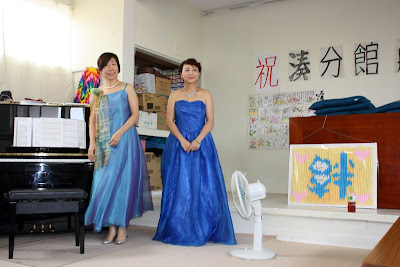 The center serves as a support and awareness-raising activity for children and a place where victims of the tsunami can participate in workshops and receive information for assistance. 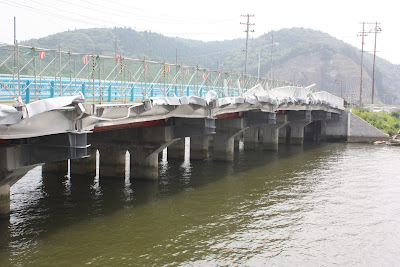 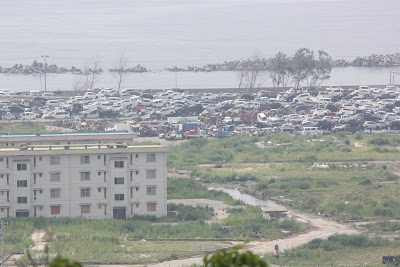 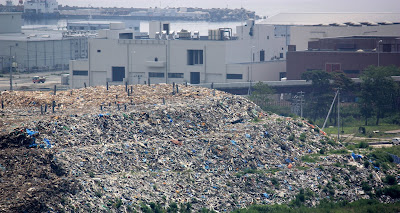 One of dozens of piles of rubble after the tsunami
I can’t overstate the impact of what the massive waves did to this town. The head of the organization, Mr. Fujita told me that 3000 people from his town died (including his entire family) and nearly 3000 more are still missing. He said the waves from the ocean came
without warning and he had just minutes to run to the second floor of his home. “The waves covered our town and inundated us with water a meter high for more than three days”. Thousands of people are still in temporary shelters and still using portable toilets.

Mr. Fujita also said that they are still suffering from lack of services and unemployment in his town is very high; more than half the population (160,000) in Ishinomaki’s prefecture is still not employed. He said the running water and sewer system are still not working in most of the areas, and he feels that the government is not doing enough to help them; they are more concerned about Fukushima and not focusing on us.

We took a tour of the town and it reveals the power of the tsunami and the extent of the clean-up and rebuilding. Many nonprofits and governments agencies are working in the towns and settlements determined to rebuild lives. 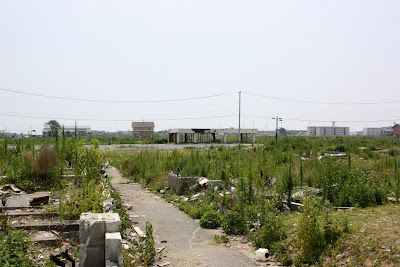 Empty lot where homes once stood
Walking around this town more than a year later I realized how strong the force of nature is. Damaged buildings are everywhere and mounds of debris are piled up in designated area around the town. In many areas along the coast where homes once stood, only the cement foundations remained. Toys and shoes of children and a lot of personal belongings are still visible throughout the area. In one area where damaged automobiles are stored you can still see personal items left behind from the victims of this tsunami. It’s very startling to see all this damage of what once were homes and businesses

Mr. Okumura and his team said that they are working to make their town even better than it was before. Ishinomaki was most famous as the home for the Ishinomori Manga Museum, in honor of the local manga artist, Shotaro Ishinomori, who wrote titles like Kamen Rider and Cyborg 009. Works by Ishinomori still decorate the streets of this devastated town. 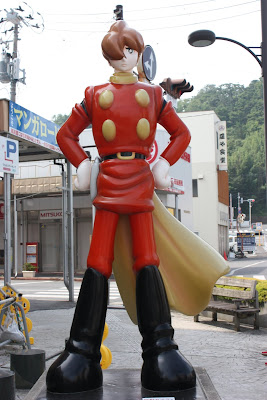 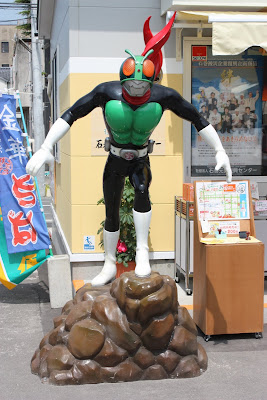 As we were getting ready to be seated for the concert two older ladies from the town greeted us with very high spirits and were eager to know where we were from.  The concert and the performance by these two young Japanese women to lift the spirits of the people in this town was an inspiration to them.

The atmosphere in Ishinimaki after this great disaster is unity and moving forward.

I was amazed and inspired!