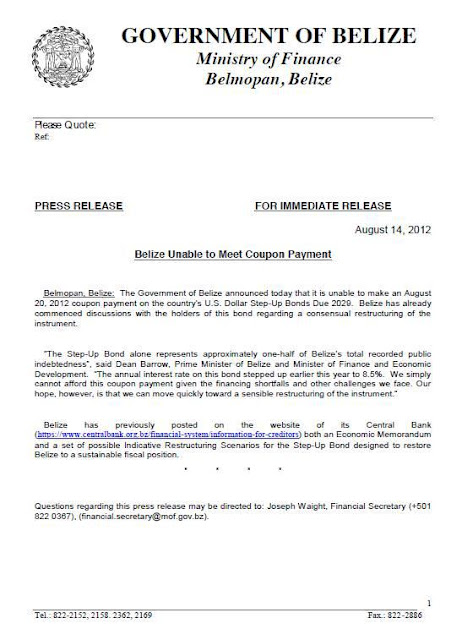 After months of contemplation the Government of Belize has finally came to a conclusion to default on its external debt. Earlier in the year, Belize has been discussing restructuring with bond holders.

Belize has previously posted on the website of its Central Bank both an Economic Memorandum and a set of possible Indicative Restructuring Scenarios for the Step-Up Bond designed to restore Belize to a sustainable fiscal position.

The Belize Default comes a day after a local television station reported on an advisory issued by financial analyst Carl Ross of Oppenheimer & Co. Inc. In the report Mr. Ross refers to the recent expropriation of private telco and electricity companies in Belize, Belize Telecommunications Ltd. and Belize Electricity Ltd. as adding to the country’s debt load.

The report quotes Mr. Ross as saying that “The Belize fiasco is that the 2029 bond is not the main debt problem faced by the government…Rather the compensation that needs to be paid for the nationalizations, combined with amortizations due to multilateral and bilateral creditors, are the most onerous debt obligations over the next several years.” The report goes on to say, “…the government unilaterally nationalized these companies, creating a huge contingent liability…it is difficult for bondholders to analyze this restructuring offer from the government without first knowing the size of the settlements to be paid to the former equity holders of the companies…”