WHAT ARE THE HEALTH BENEFITS OF CASHEWS? 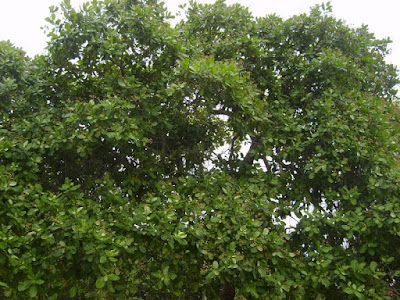 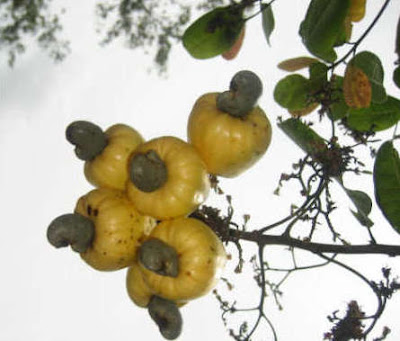 A Hearty Bunch of Cashews 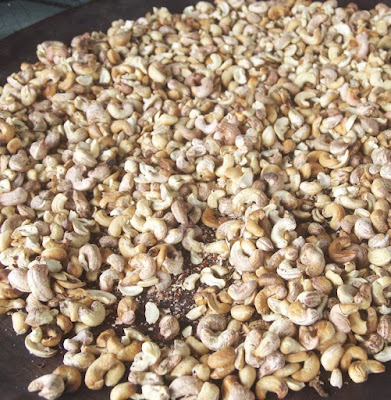 The Nutrional Health Facts of Cashews
By Kate Meyers
Whether roasted, salted, sugared or covered in chocolate, the cashew nut, often used as a flavorful complement to appetizers, main dishes and desserts, packs a mix of nutrients and minerals not found in many common foods.

Cashew nuts, are actually seeds, found growing on the end of the cashew apple, an edible and nutrient rich treat that is too fragile to export to North America or .
Also known by the botanical name Anacardium occidentale, the cashew is a close relative of mangos, pistachios, poison ivy and poison oak. It was first introduced on a worldwide scale by Portuguese explorers in in the 16 th century, but international trade didn’t take off until the 1920s.

Sometimes called “nature’s vitamin pill,” cashew nuts, which now rank #1 among nut crops in the world with 4.1 billion pounds produced in 2002 , have been used to promote wellness for centuries.

MEDICAL BENEFITS
The cashew tree’s leaves and bark as well as the popular cashew apple possess herbal health benefits that include killing bacteria and germs, stopping diarrhea, drying secretions, increasing the libido, and reducing fever, blood sugar, blood pressure and body temperature.
The cashew nut, a popular treat found on grocery and health food store shelves across the world, is jam-packed with nutritional content. It packs 5 grams of protein per ounce and high levels of the essential minerals iron, magnesium, phosphorus, zinc, copper and manganese, which are utilized in holistic health solutions and healthy diets.

Cardiovascular and Circulatory Health
With no cholesterol, a rarity for such a tasty and pleasing treat, cashew nuts are a healthy fat food for heart patients. And because of their high levels of monounsaturated fatty acids, they also help support healthy levels of low good (HDL) cholesterol.

Magnesium also works with calcium to support healthy muscles and bones in the human body.

Copper, which is an essential component of the enzyme superoxide dismutase, is vital in energy production and antioxidant defense, producing greater flexibility in blood vessels, bones and joints.

Diabetes
Recent clinical trials have shows that cashews and other nuts work with a person’s lipid profile to have a beneficial effect on those with diabetes or at risk for diabetes.
And with 37.7 percent of the daily recommended value of monounsaturated fats, cashews can reduce triglyceride levels in diabetics, protecting them from further complications.
Integrating frequent nut consumption into your diet, especially raw cashews, may lower the risk of developing Type 2 Diabetes, the most commonly diagnosed form of diabetes in today.

Gallstones
All nuts, including the cashew nut, have been associated with a reduced risk of gallstone disease.

According to the Nurses’ Health Study, looking at the dietary data of 80,718 women, integrating at least one ounce of nuts a week, such as cashews, gives women a 25 percent lower risk of developing gallstones.

DENTAL HEALTH
Research has also shown that chemicals in cashew nuts kill gram positive bacteria, a pervasive mouth affliction that causes tooth decay, acne, tuberculosis and leprosy.
Eating cashew nuts at moderate levels, some say, can eliminate abscessed teeth, though this has not been proven yet by proper clinical trials.

Topical Uses
While the cashew nut is most enjoyed when eaten, it also possesses astringent qualities that are now used in topical creams and gels.

A Philippine scientist who has made a career out of studying the health benefits of cashew nut extract markets the extract in a cream for warts, moles and other skin growths.
The Philippine-produced cream is also reportedly effective on basal cell carcinoma; the most common type of skin cancer, though this too is not yet available in the

ENSURE FRESHNESS
Always check your cashews for freshness before you dig in. While cashews have a high amount of the stabilizing oleic acid, a monounsaturated fatty acid, they should always be stored in a tightly sealed container in a cool, dry place.

And don’t eat too many at once. Because of their high fat content, over consumption of cashew nuts can cause unwanted weight gain in individuals. The oxalates in cashews can also become concentrated in body fluids, crystallizing and causing health problems in people with preexisting kidney or gallbladder problems.

With cashew nuts, moderation is the key in reaping the health and flavor benefits of nature’s treat.

Posted by Linda Crawford at 9:59 AM