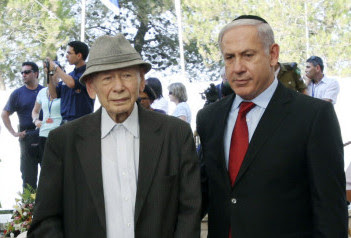 PM Netanyahu and his father
PM of Israel, Benjamin Netanyahu's father, Benzion, passed away today at the age of 102. The elder Netanyahu emigrated to Palestine from Poland with his family in 1920. He was a renowned historian, specializing in the Spanish Inquisition, and a professor emeritus at Cornell University.

Ben-Zion Netanyahu was born in on March 25, 1910, named Ben-Zion Mileikowsky. In 1920, he and his family immigrated to the . In 1944, he married Tzila, whom he had met during his studies in the . Ben-Zion Netanyahu had three sons – the late Col. Yonatan Netanyahu, who fell during Operation Yonatan at ; Benjamin, the Prime Minister of Israel; and Ido, a doctor, author and playwright.

Prof. Netanyahu was among the great historians of the Jewish People. In his research, he focused on the history of the medieval Spanish Jewish community and the history of Zionism. Among his books are a biography of Don Isaac Abravanel, a history of the Spanish Marranos and his major work, 'The Origins of the Inquisition in Fifteenth Century Spain', which received global acclaim. He also authored 'The Founding Fathers of Zionism' about the lives of the founders of political Zionism – Leon Pinsker, Theodor Herzl, Max Nordau, Israel Zangwill and Zeev Jabotinsky.

Prof. Netanyahu was the editor-in-chief of the Hebrew Encyclopedia for over a decade. He served as Professor of Jewish Studies at various universities and concluded his academic career as Professor emeritus at .

From his days as a student in , he was involved in public Zionist activities. He was a supporter of Zeev Jabotinsky and edited a newspaper that also featured Prof. Joseph Klausner and poet Uri Tzvi Greenberg on its staff.

He defended those who were accused of Chaim Arlozorov's murder and, to this end, persuaded his father, Rabbi Natan Mileikowsky, to enlist the support of Rabbi Avraham Isaac Hacohen Kook to defend the accused. Rabbi Kook later delivered a moving eulogy for Rabbi Mileikovsky.

In 1939, Ben-Zion Netanyahu traveled to and persuaded Jabotinsky to relocate to the out of the view that the latter would be the rising power in the world and that from there it would be possible to mobilize support for the Jewish state. Jabotinsky died shortly after their arrival in the ; Netanyahu continued to raise support for the Jewish state throughout the war and afterward.

In this context, he met with many Jewish leaders of the period, as well as with Senators, Congressmen, authors, poets and leaders, including Dean Acheson and Dwight D. Eisenhower. Upon the establishment of the State, he returned from the and moved with his young family to 's Talpiot neighborhood. He dedicated himself to his research, in which he was assisted by his wife Tzila, a native of Petah Tikva who was his life's partner for over 50 years.

In 1952, the Netanyahu family moved to its home a , where he passed away early this morning.

"May the Almighty comfort them with all of the other mourners of Zion and Jerusalem."