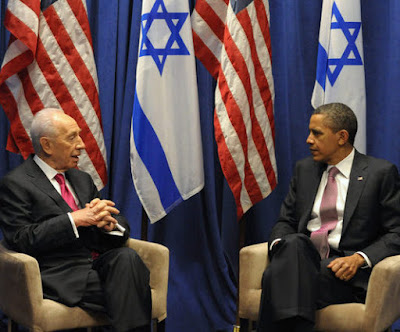 President Shimon Peres of Israel is the recipient of the Presidential Medal of Freedom. This is America's highest civilian honor. Mr. Peres said that U.S. President Barack Obama is “a great president and a great friend of Israel,” and that security cooperation between the U.S. and Israel is “the best we’ve ever had.”


Shimon was born a world away from here, in a shtetl in what was then Poland, a few years after the end of the first world war. But his heart was always in Israel, the historic homeland of the Jewish people. And when he was just a boy he made his journey across land and sea – toward home.


In his life, he has fought for Israel's independence, and he has fought for peace and security. As a member of the Haganah and a member of the Knesset, as a minister of defense and foreign affairs, as a prime minister and as president – Shimon helped build the nation that thrives today: the Jewish state of Israel. But beyond these extraordinary achievements, he has also been a powerful moral voice that reminds us that right makes might – not the other way around.


Shimon once described the story of the Jewish people by saying it proved that, "slings, arrows and gas chambers can annihilate man, but cannot destroy human values, dignity, and freedom." And he has lived those values. He has taught us to ask more of ourselves and to empathize more with our fellow human beings. I am grateful for his life's work and his moral example. And I'm proud to announce that later this spring, I will invite Shimon Peres to the White House to present him with America's highest civilian honor – the Presidential Medal of Freedom.


In many ways, this award is a symbol of the broader ties that bind our nations. The United States and Israel share interests, but we also share those human values that Shimon spoke about: a commitment to human dignity. A belief that freedom is a right that is given to all of God's children. An experience that shows us that democracy is the one and only form of government that can truly respond to the aspirations of citizens.
This is an extremely well-deserved recognition, because he has dedicated his life to peace. His whole life has been a message of peace; the alternative, war, is the last resort. Blessings and protection over you Mr. Peres and the State of Israel!