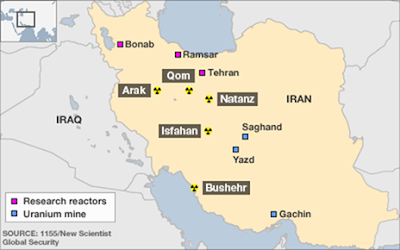 Map of Iran's nuclear program
Weekly round-up of the Hebrew newspapers in ; covering the major events happening in  and the . Haaretz-Maariv-Yedioth Ahronoth-Israel Hayom-The Jerusalem Post-Ynet
On Thursday all the Israeli newspapers lead with more of the ‘noise’ surrounding a possible military strike against ’s nuclear facilities.

In May former Mossad chief Meir Dagan spoke about and describing the thought of military action to thwart Iran’s nuclear aspirations as “a stupid idea”, there has been a mixture of noise from every quarter ever since. And the noise has reached a gradual increase in the past week or so in . Commentators have been speculating whether Prime Minister Binyamin Netanyahu and Defense Minister Ehud Barak have already made up their minds to attack , Knesset ministers speaking on behalf of the government have attacked such reports as irresponsible and treasonous.
According to Kuwaiti newspaper Al-Jarida, Netanyahu has ordered the Shin Bet to investigate the leaks on the possibility of a military strike on the Iranian nuclear facilities. The newspaper, which has been the recipient of Israeli government leaks in the past, alleged that former security officials had enlisted journalists and opposition politicians to launch a political campaign against Netanyahu and Barak on the Iranian issue.
The problem, however, is that while the government and its emissaries are busy denying that plans are afoot to attack , all the signs are that is very much engaged in preparations for a such a move.
To begin with, the IDF’s Home Front Command is conducting a drill in the center of the country, aimed at simulating a massive missile attack – which is what the defense establishment expects in the aftermath of an Israeli attack on . At the same time, the military confirmed yesterday that Israeli fighter planes took part last week in a training exercise in , designed to prepare the pilots for a long-range mission in unfamiliar surroundings. And on Wednesday, the IDF successfully tested a new long-range ballistic missile, which, according to reports, is capable of carrying a nuclear warhead. Defense Minister Barak congratulated the defense establishment and military industries for Wednesday's successful test, which officials called an important step and an impressive technological achievement for . At the same time, however, Barak said the test-launch was planned a long time ago.
Meanwhile, current and former defense and intelligence officials have been speaking out. The lead story in Israel Hayom is taken from comments by Strategic Affairs Minister Moshe Ya'alon, who accused Dagan of acting improperly and of revealing state secrets.
Maariv and Yedioth Ahronoth lead with quotes from Mossad chief Dagan, who defends his comments on and reiterates his assertion that Netanyahu and Barak have been discussing the military option.
In an interview on Thursday with Israel Radio, Former National Security Council director Giora Eiland said, contrary to opinions rendered by other top security officials, there was nothing “irresponsible” in considering an attack on 's nuclear facilities. “It's not a crazy idea”, Eiland said, as long as the preparation for such an attack was done properly.
The decision to attack would, of course, be made by the government, but the IDF's input would, and must, be key in determining whether or not that attack should take place, Eiland said. “The defense establishment must give the political establishment the answers it needs regarding the implications of such a move and our ability to undertake it, and to provide information on 's capabilities”. Among the main issues that must be taken into consideration, Eiland says, is whether an Israeli attack would solve the problem of 's nuclear program. If it would not, alternative means might need to be found to deal with the Iranian program. If, however, such an attack would wipe out Iran's nuclear capability or deal it a mortal blow, then the government could consider it  a viable option, despite the dangers associated with such a move”, Eiland said.
Haaretz Newspaper leads with a poll that finds that Israelis are almost evenly split on whether should attack 's nuclear facilities: 41 percent supporting such a strike and 39 percent opposed.
In the meantime, all the papers point out that the international community is waiting for publication of an upcoming report by the International Atomic Energy Agency. According to Maariv, IAEA chief Yukiya Amato says that the report is unlikely to draw a definitive conclusion over whether is making nuclear weapons. However, Western diplomats say that the facts contained in the report will make any other conclusion implausible.
Meanwhile, Ynet reports that 's Daily Telegraph newspaper quotes unnamed Western diplomats as saying that the International Atomic Energy Agency has substantiated evidence from a variety of sources that is carrying out a nuclear weapons program in parallel to its civilian energy goals. According to one official cited by the paper, has been evasive, making it difficult to discover the so-called smoking gun. However, the report is expected to be more detailed than before, pointing to black holes in 's explanations about its nuclear program, and increasing pressure.
In other news, The Jerusalem Post reports that the IDF is monitoring the progress of two vessels carrying medical aid and activists that set sail from in a new bid to break 's blockade of the Gaza Strip. The military said it is determined not to allow the flotilla participants to reach the Gazan shore. The Israeli assessment is that there will not be a violent confrontation, but the IDF says it is ready for any scenario. An IDF spokesperson said the flotilla participants are more than welcome to send their aid shipment to by land.
Finally, Maariv reports that, for the first time since the Mavi Marmara incident, and are engaged in direct negotiations aimed at improving bilateral relations. The paper says that the Israeli humanitarian aid to after the devastating earthquake there, and the message of condolences that Netanyahu sent Turkish Prime Minister Recep Tayyip Erdogan following the death of his mother have both contributed to the thaw in relations. The paper goes on to say that, having successfully negotiated the Shalit exchange deal, David Meidan will be dispatched to Ankara in the coming days to finally reach an agreement over an Israeli apology for the deaths of nine Turkish citizens aboard the Mavi Marmara in May 2010.
Map source:http://www.bbc.co.uk/news/world-middle-east-11927720