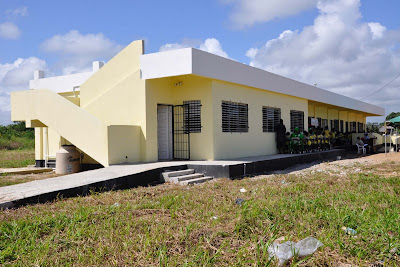 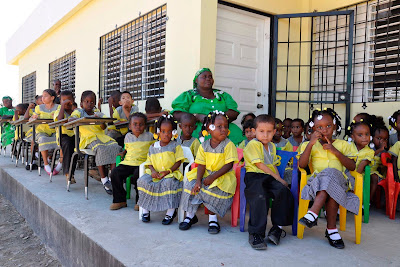 Some of the 140 children benefiting from the new school
The new was officially inaugurated today, Wednesday, November 16th  at the school compound near the site in .
The project, which will benefit over 140 students, was implemented by the Social Investment Fund and was financed by the Government of Belize at a total cost of $371,000.00 through the Commonwealth Debt Initiative (CDI).
The new school is comprised of a one storey reinforced-concrete building measuring 121 feet long by 30 ft wide with a 6 ft verandah.  The building includes four classrooms (24 ft by 25 ft ) with two movable partitions and a male and female bathroom block.  The building was constructed to accommodate a future second storey. Solid timber doors and aluminum storm guard windows were installed.  The community of Dangriga provided arm-chairs for the children while SIF also provided furniture in the form of teachers’ desks and chairs, book shelves, cup boards and black boards.  The new school will serve as a shelter in the event of an emergency.
The , which is managed by a Board of Directors in collaboration with the National Garifuna Council, came about as a result of the overcrowding of other elementary schools and the distance of the growing and expansion of residential areas and population growth in .  The primary school is located some 1 1/2 miles  north of at the Garifuna Monument Site and Museum. However, shortly after being established the outgrew its space rapidly due to swift growth in student population.
The is very unique among other schools in and the in that it links the knowledge of the ancestors with the curriculum of the Ministry of Education through an Intercultural Trilingual Education programme – English, Spanish and Garifuna. In other words, enables the child to be rooted in the community while preparing him or her to take his/her place as a citizen of the world.  In addition, the school has also played an active role in the promotion and preservation of the Garifuna culture.
Established in April 2007, the school has students up to standard 3 but classroom space was needed for the upcoming standard 4, and in the near future for standards 5 and 6. Due to the overcrowded situation, the upcoming standard 4 students had to be accommodated in the Museum.  The also operates a pre-school, which is housed in a rented building adjacent to the main school building.
The keynote speaker at the official inauguration of the project was the Hon. Patrick Faber, Minister of Education and Youth.  Other speakers were the Hon. Arthur Roches, Minister of State in the Ministry of Health and Area Representative for Dangriga.  Addresses were also delivered by officials of the Social Investment Fund and members of the Gulisi School Management and P.T.A. 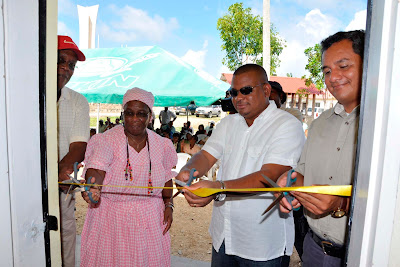