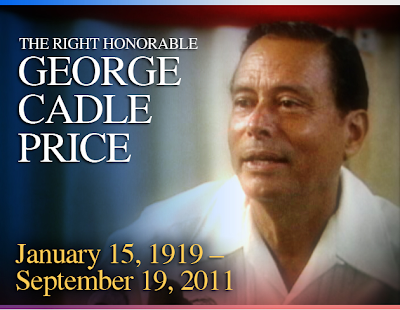 Linda you scored big. Thanks for sharing this tribute by our Prime Minister of the late Honorable George Cadle Price. This was a very touching tribute. It was very comprehensive and fitting.

Prime Minister's tribute to Hon. George Cadle Price was fitting, and delivered with class and eloquence.

So proud of you Prime Minister Barrow!

A most eloquent and respectful presentation by Prime Minister Barrow. The absolute national unity triggered by the passing of former Prime Minister the Rt. Honorable George Price was firmly consolidated by Mr. Barrow's historic speech.
The truly non-partisan, non-political and gracious nature of the speech was a display of mature statesmanship, and outstanding leadership. The father of the nation would have been very proud. It was a tribute befitting the greatest son that Belize have ever produced.
As Mr. Barrow said: "Mr. Price was a giant of a man".....May his legendary legacy live on. REST IN PEACE Rt. Hon. Prime Minister George Price.

As always I am touched as I see the somber pageantry of Hon. Price's final farewell through your eyes. I am truly appreciative to you for sharing with us what we were not able to witness ourselves.

Fitting tribute to a great man. He was the ultimate politician yet acompassionate leader of all Belizeans.
Well done, Linda.

Thank you Linda,this is a wonderful acknowledgement; I will print and keep it in my file that I keep with article such as this.