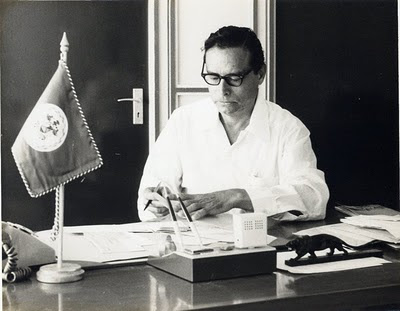 Rt. Hon. George Cadle Price working at his desk
Today, the entire nation of is mourning the passing of the first prime minister and national hero, Rt. Hon. George Cadle Price. Former Prime Minister George Cadle Price, died today after being hospitalized for nearly a week following emergency surgery. He was 92 years old.
On September 14th, Mr. Price fell at his home in and suffered an injury to his head. The Father of the Nation was rushed to the where he underwent surgery to remove a blood clot. Unfortunately, he did not recover from his injuries.
Mr. Price led the nation of to its independence from on September 21st, 1981. He served two terms as prime minister from 1981-84 and 1989-1993. He is considered a national hero to the 350,000 people of .

You can read Belizean Spotlight on Mr. Price here: http://www.villageviewpost.com/2010/09/belizean-spotlight-september-2010_6104.html
Photo from Yasser Musa at The Image Factory
Posted by Linda Crawford at 2:34 PM

What a legacy he leaves behind and what incredible footprints he leaves in the Belize sands of time.

A true politician, a consummate humanitarian and a guiding light for so many who, at his feet, learned the fine art of politics.

Belize lost its architect of independence, but is richer for having to embraced the essence of the man that was the Rt. Hon. George Cadle Price.

A bittersweet Independence Celebration this year. Downtown San Ignacio was very quiet and more than a few tears today...God Bless. RIP and prayers for the family.

Our national anthem never sounded any better. It may well be because I loved him so.

R.I.P Mr.Price, you did our country a lot of good,you will surely be missed.

I love that he never elevated himself above his people. He was for the people. I remember meeting him on the streets of Belize City as a child during one of his campaigns and he greeted us with warm handshakes:) He lived a full, selfless life. Our current politicians could learn a thing or two from him!

Thank you so much Linda; bring back so many good memories of my childhood growing up in Belize.

My deepest sympathies... In the short time I spent in Belize I was fortunate to meet him; seemed to be a very nice man. I'm sure he will be missed regardless of party or politics. Rest in Peace Honorable Prime Minister.

We are called to build this nation; to ensure that it is Christian and prosperous; free. A nation whose citizens are distinguished by correct sense of national pride, dignity, and virtue. We are called to put an end to every trace of prejudice, ignorance and mistrust. Such is the nature and challenge which confront us – this, our appointment with history.