1000 ISRAELIS IN NUDE SHOOT AT THE DEAD SEA 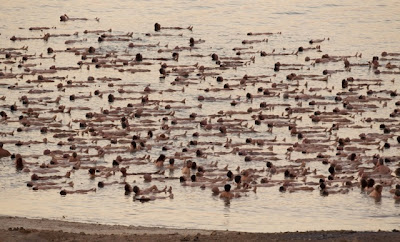 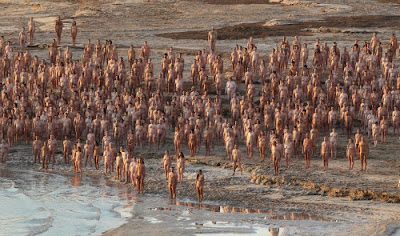 At dawn this morning, at the lowest point on earth, more than 1000 Israelis volunteered to pose nude for photographer Spencer Tunick at the .  Mr. Tunick is famed for photographing crowds of naked people in public spaces around the world.
The was chosen to send an environmental message of the plight of the lowest and saltiest body of water on earth. The is dropping by nearly 4 feet a year. Experts warn that the could dry out by 2050 unless steps are taken to halt its demise.
The project, Tunick’s first in the Middle East, is part of a bid to boost ’s campaign to have the salt-saturated feature recognized as one of the world’s seven natural wonders in a global online vote in November.
You can read the account here!
Photo #1 by Jack Guez/AFP
Photo #2 by Nati Shohat/Flash 90 at Israel21c.com
Posted by Linda Crawford at 11:58 PM