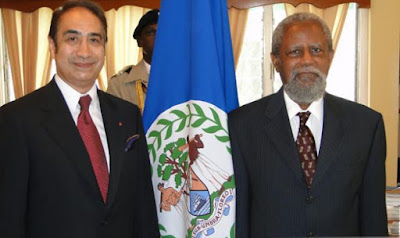 His Excellency Mario Velázquez Suarez (L) and Governor-General of Belize, Sir Colville Young (R)
, 22nd August, 2011. ( House) His Excellency Mario Velázquez Suarez today presented his Credentials to the Governor- General of as the Ambassador of the United Mexican States to .
In a brief but impressive ceremony at Belize House in , Ambassador Velázquez Suarez told the Governor-General, Sir Colville Young, that he felt extremely honoured to be appointed to this distinguished post. He added, “ desires a special relationship with , and always frank.
Therein lies my instructions and my own convictions. Therefore, Your Excellency, the work of the Embassy to my care will be tireless, but I am sure that working side by side, Belizeans and Mexicans, we will build a prosperous and dignified future for the benefit of our countries”.
Earlier, Ambassador Velázquez Suarez had paid a courtesy visit on Minister of Foreign Affairs and Foreign trade, Hon. Wilfred Elrington when he presented to him a copy of his Letters of Credence.
Ambassador Velázquez is a career diplomat, having joined the Mexican Foreign Service in 1975 and obtaining the rank of Minister in 1999. He has been serving as Head of Chancellery at the Embassy of Mexico in since 2008. He has command of the English and French languages and has knowledge of Italian and Portuguese. He is married and has two children.

I love the way you report about the happenings in our country of Belize, keep up the good work, sister, I will from now on keep reading your emails.

Thanks again & May God continue to Bless you, to keep us inform over here in the U.S.of A.

Good afternoon Ms. Crawford, I have been following your very informative articles via email. Wonderful work.
I am from Punta Gorda.

Keep up your informative reporting and we will keep in touch.

Thank you, God Bless and be well.
RM.