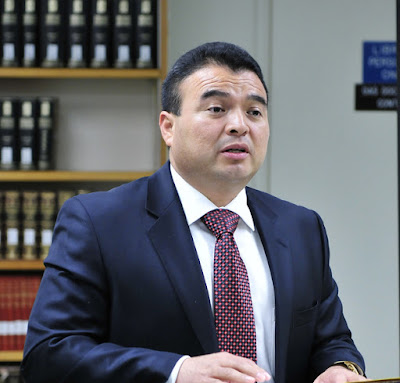 Ambassador Nestor Enrique Mendez-Belize
19 Washington, D.C-based envoys arrived in  on August 7th as part of a five-day fact-finding mission to and the organized by TIP (The Israel Project). Their first stop was to the 's Shrine of the in (From left: the ambassadors to are from , , , the , , and ). 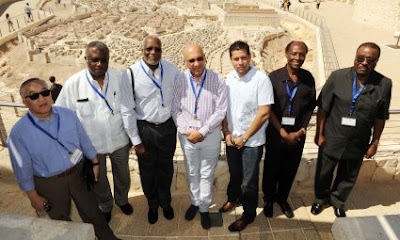 From left: the ambassadors to  are from , , , the ,   ,  and .
, Aug 7 – A delegation of 18 Washington-based ambassadors from four continents and one other senior diplomat have embarked on a fact-finding mission to and the organized by The Israel Project (TIP).

The envoys, most of whom had never been to before, were scheduled to meet with Israeli Prime Minister Benjamin Netanyahu on Monday. They also had meetings planned with President Shimon Peres, Deputy Prime Minister Dan Meridor, Vice Prime Minister and Minister for Strategic Affairs Moshe Yaalon and opposition leader Tzipi Livni during their five-day mission.

On Monday evening, they will go to the Old City of to observe the commemoration of Tisha B’Av (the 9th of Av), a solemn day of mourning for Jews marking the destruction of the Biblical First and .
A packed schedule also features a helicopter ride over the northern and southern borders of during which the envoys will see some of the country’s strategic defense challenges and security threats.
Entrepreneurs and innovators in alternative energy, agriculture, medicine and environmental services will brief the group which will also visit 's Agency for International Development Cooperation (MASHAV) which since 1958 has provided development training to more than 200,000 people from around the world.
The ambassadors will also learn about ’s humanitarian programs that respond to natural disasters around the world and explore opportunities for bilateral trade. Israeli organizations are currently on the ground in dealing with the aftermath of this year’s deadly tsunami.
On August 9 the group, representing nations in Europe, Asia, Africa and the will meet with Palestinian Prime Minister Salam Fayyad in Ramallah as well as Sir Ronald Cohen of the Portland Trust, a British non-profit which promotes Palestinian economic development. A recent poll by The Israel Project showed that job creation is the top priority for Palestinians.
“We are deeply honored that these distinguished ambassadors have joined us on this fact-finding mission,” said TIP Founder and President Jennifer Laszlo Mizrahi.
The mission comes in the run-up to important debates about the expected to take place at the United Nations this fall. U.S. President Barak Obama recently stated there are no alternatives to peace talks between Israelis and Palestinians and that one-sided Palestinian moves will not achieve peace or stability.
The trip is sponsored by The Israel Project, an American non-profit educational organization that provides facts, analysis and background information about and the to the media, public officials and the public.  TIP also reaches out to Palestinians and other Arabs in Arabic through its “People to People” Peace program which works to open hearts and minds in the Arab world toward peace and a better future for both sides. More than 100,000,000 people in the Arab world have signed up as “fans” of the TIP Arabic Facebook page, “Israel Uncensored” which was launched only two months ago.

The diplomats taking part in the mission are: