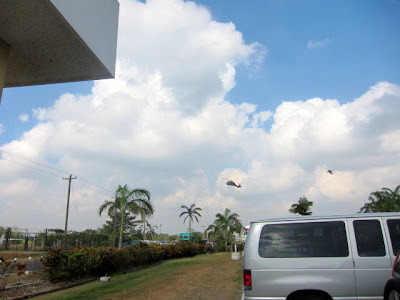 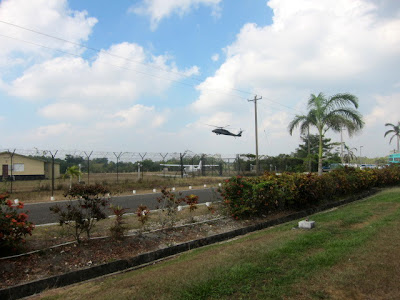 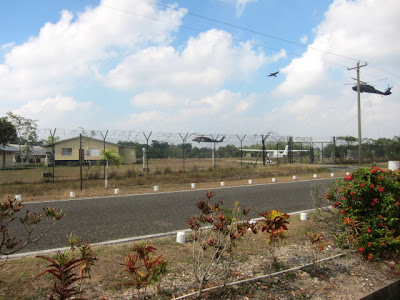 In early May while driving to the I heard the unusual noise of helicopters engines close to the ground. I pulled over to the side of a road and began taking pictures. The immediate thought that came to my head was; are these Blackhawk helicopters?
They landed in a large open field near the airport and US Army soldiers began jumping out. With palms sweating, I continued to snap pictures having no idea what was going on.  I was so taken with the sudden action I did not notice a black SUV pulling on the side of the road next to me. Four men dressed in Belize Defense uniforms began talking to me and telling me to stop taking photos. I asked them if these were Blackhawks and what are they doing here.  The senior one in the group told me that we can’t answer your questions. I asked him why and he said if we do we will have to get rid of you right away.
I told him that it would be a really big “oops” to do something like that, wouldn’t it? He said," it would be a really good idea to get back in your car". I told him that as far as I know this is a public road and I can stay here as long as I want. "Not bad", he said with a smile. 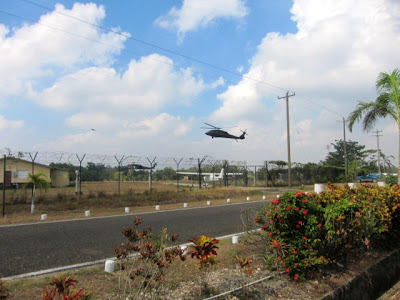 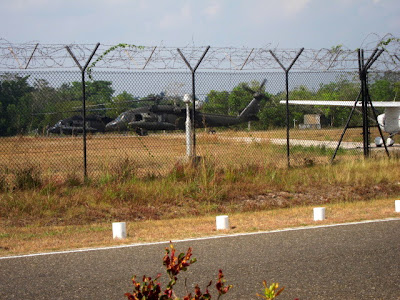 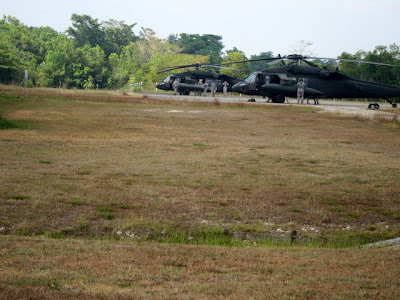 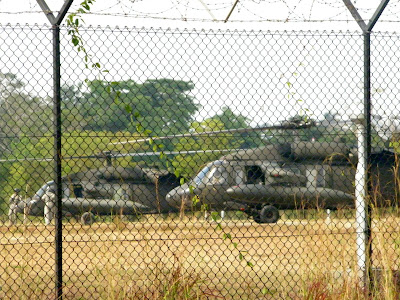 I jumped over a nearby ditch and jolted myself out of what felt like a daydream. I gradually gained confidence, as I got into my car and continue driving to the airport to pick up my sister. 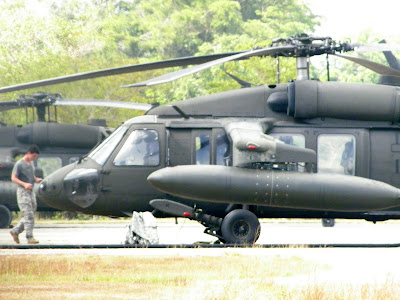 The Black Hawk helicopter is a four-bladed, two engines, versatile Army fighting machine—and it’s the pride and joy of the US Army......this is my last photo before I got into my car.
Still, I'm not sure if these are Blackhawks.....
Here is a link to an article on US special Operations in Belize: http://www.shephard.co.uk/news/uvonline/quad-a-2011-second-chance-for-hummingbird-in-belize/8859/
Posted by Linda Crawford at 12:29 PM

Email ThisBlogThis!Share to TwitterShare to FacebookShare to Pinterest
Labels: Blackhawk Helicopter, Secret Mission in Belize, US Army in Belize

Wouldn't be surprised; after all the US is conducting a lot of operations in Belize!

Don't know if they were Blackhawks, but there is a chance they are in the area --- http://www.facebook.com/l.php?u=http%3A%2F%2Fawe.sm%2F5IwKH&h=77aaf

Linda: Blackhawks, my husband Allan used to be a blackhawk mechanic in the army.

I was there the day they were brought in by two DEA C-17 cargo jets!!!! They just had the rotor blades folded back.

You have outdone yourself with this one. I think that you have more chutzpah that I do, ad I am know to do some extraordinary things to get the story. Great report and well done.

Be careful someone may see this and report you....this seems to be a very hush hush thing. You don't want the USA coming and asking why you posted this.

Anonymous: thanks for your advise, but I don't think I have to worry about this one. I think standing by the side of the road is not secret at all; besides the US have a secret (so called) base in Belize on Calabash Caye in the center of the East side of Turneffe Atoll. And there are other secret opertions "Robocopter" Spotted in Belize.

Here is a link to one of the stories that are out there:http://www.wired.com/dangerroom/2010/08/special-forces-robocopter-spotted-in-belize/

you are such a General

General I am....but someone have to do it.