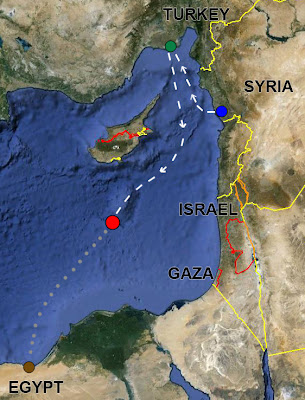 
Jerusalem, April 12 – Israel is debating a withdrawal of Israel Defense Forces (IDF) from the West Bank, in order to prevent the Palestinian Authority (PA) from unilaterally declaring a state along 1967-lines.  Haaretz is the only paper in Israel reporting this.


In its lead headline, Haaretz is reporting that Prime Minister Binyamin Netanyahu is considering a series of measures aimed at preventing what Defense Minister Ehud Barak recently described as ‘an impending diplomatic tsunami.’

According to the Haaretz report, the three measures that Netanyahu is considering are:
1. Another withdrawal in the , which would see the IDF forces redeploy and security responsibility handed over to the Palestinian Authority. While the extent of the withdrawal is not known, it is not thought to include the evacuation of settlements.
2. An international umbrella, in the form of an international conference, in which both Israel and the Palestinian Authority would participate, and which would call for a resumption of negotiations.
3. Diplomatic pressure on Western countries (the U.S., the European Union, Canada, Australia and others) against the recognition of a Palestinian state at the UN General Assembly in September.
In another development , the has announced the postponement of a planned meeting of the Mideast Quartet, which was due to take place in on Friday, April 15th. According to reports, blocked an initiative by , and to re-start stalled Israeli-Palestinian talks by proposing the outlines of a final settlement to be based on the establishment of a Palestinian state on the 1967 borders with agreed-to land swaps.
The three European countries wanted UN Secretary-General Ban Ki-moon and the European Union to propose a settlement at a meeting of the Quartet of Mideast mediators – the , UN, EU and – on the sidelines of a NATO ministerial meeting. official said the Obama administration didn't think a Quartet meeting would produce anything useful in terms of getting the talks restarted.
The Jerusalem Post leads with a story which first broke on Monday morning, April 11th: A expected draft indictment against Foreign Minister Avigdor Lieberman.

Attorney General Yehuda Weinstein's announcement that he intends to file an indictment against Foreign Minister Avigdor Lieberman, pending a hearing, on charges of fraud, money laundering, obstruction of justice and breach of trust.


According to the draft indictment, Lieberman is suspected of receiving millions of dollars from private business people, through straw companies, between the years 2001 and 2008, while he was a member of Knesset and a cabinet minister.


Commenting on the attorney general's decision, Lieberman said: 'I've always abided by the law and have no reason for concern. After 15 years, I will finally be given the opportunity to prove that I adhered to the law. You know I am a man of my word.'


If the foreign minister decides to accept the offer of a hearing, he will not have to resign from the cabinet. However if the Yisrael Beiteinu leader passes on a hearing, in order to prevent exposing his line of defense during a trial, an indictment will be served against him and he will have to step down.  Prime Minister Binyamin Netanyahu expressed his hope that Lieberman would be proven innocent. Netanyahu noted that he has been working with Lieberman for a long time and that Lieberman is a central figure within the government who he hopes will continue to contribute to public life.
Posted by Linda Crawford at 11:37 AM