CROOKED TREE FISHERMEN UP IN ARMS 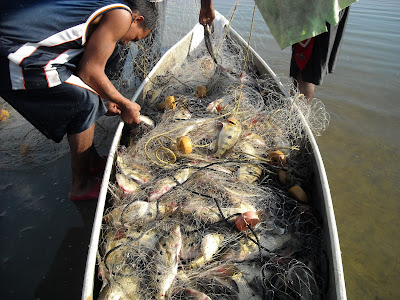 We have received several calls this morning from residents of Crooked Tree Village who told us there was a standoff between fishermen in the village and authorities.

“Fisher folk of Crooked Tree Village are venting their frustrations as the village council have barred them from casting their nets in the lagoon. Fishermen say today is one of the biggest income earning day of the year as fish is in high demand for Good Friday. These cries are being overlooked because the village council says about three weeks ago the Village Council and the fishermen held a meeting to draft a plan for fishing since the lagoon is known to dry up around this time. According to treasurer of the Village Council, Mildred Crawford, none of the fishermen came up with a plan, and with no input from their end, they decided to enforce the law that govern fishing in their village. Crawford said the fishermen were allowed to fish yesterday which they did, but reiterated that the decision had the approval of the fisher folk. Crawford ended by saying that the rule will apply throughout the Easter break and that the hauling and netting of fish will resume until Tuesday. The decision has divided the residents of the small fishing village of Crooked Tree and a Village Council standing firm and adamant about enforcing the laws.”

I watched the video on fishing in Crooked Tree Village, but I also watched the cashew video. It was very interesting. While I was in Progresso last time, I made some photos of the preperation of "Ricado" from a local tree. A lot of these "Old Ways" are being lost to the people in Belize City and Belmopan. Hopefully others will preserve natural ways to preserve food for times when they aren't plentiful.

As a ancestor of Crooked Tree and witnessing this uproar in our village, I am so mad to see what is going on. First of all, the people went ahead and elect majority of the village council who are not even descendants of the village. So now I guess that the villagers are getting what they paid for. I understand that when these people were campaigning that they did so to the younger crowd and made all kinds of promises that they can't keep. I dare to tell our villagers, that this is what you get when you want to depend on someone else to make your life better. Belizeans from Crooked Tree who moved away need to go back and help to educate our villagers and don't let the first foreigner convince them that they will make life better for them. This big mouth Mildred Crawford needs to go back to where she came from and stop harrassing the fishermen. What most people forget is that the lagoon will dry up and the fishes will die anyway. To use net during this time has been a long standing tradition and to watch this big mouth women that call herself christian shout and yell at my sister makes me mad as hell. I hope they make better choices next time.