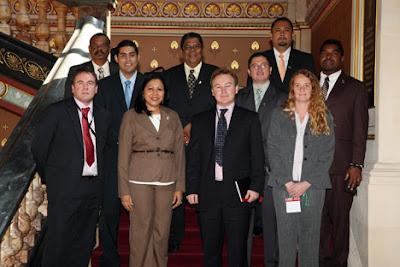 8 Mayors from visited the at the end of March sponsored by the British High Commission. Those in the delegation were: Mayor Simeon Lopez, ; Mayor John August, San Ignacio and Santa Elena;
Mayor Hilberto Campos, Corozal; Mayor Nicholas Ruiz, Benque Viejo Del Carmen; Mayor Aaron Gongora, Dangriga; Mayor Floyd Lino, Punta Gorda; Mayor Elsa Paz, San Pedro; Mayor Zenaida Moya-Flowers, Belize City.
Press Release – British High Commission – April 8, 2011
The team were in the for the Commonwealth Local Government Conference in , but went on to a major programme of high-level visits in . Also attending the conference was a team from the Ministry of Labour, Local Government and Rural Development made up of Minister Hon Gabriel Martinez, CEO Mrs Marion McNab and Mr Celso Carcamo (Local Government Officer).
The Local Government Conference was held at the City Hall in , from 15 to 18 March 2011. Hosted in the city for the first time, the theme of the Conference was “Energising Local Economies; Partnerships for Prosperous Communities”. It presented Cardiff Council with the opportunity to share international knowledge with delegates from 54 Commonwealth countries. More than 500 delegates attended, with providing one of the larger delegations, including Ministers, Chief Executives and Senior Local Government staff. The Conference provided a platform for discussion on the role of local government in local economic development and explored ways to maximise opportunities for encouraging prosperous communities. The main areas of focus were youth unemployment, regeneration and education, securing investment, promoting enterprise and funding business support initiatives.

This was the first visit to the for most of the Mayors. The High Commission was therefore keen to show them the ’s wealth of private sector experience in delivering services to and for the public sector. In partnership with the Caribbean Council they arranged a full programme of meetings during the team’s second week, which provided a way of identifying opportunities for working with companies to address local issues in . It also served to alert companies to opportunities in and to build business relationships.
The intense three day programme started with a tour of the recently completed massive construction project at the site of the 2012 Olympic Games. The first of their meetings was with Eversheds LLP, an innovative international law firm with legal specialists that operate around the world in sectors including financial institutions, energy, natural resources, food and transport. The discussions focussed on waste management, sanitation, recycling and tourism. A meeting with the Deputy Mayor of , Richard Barnes, provided an opportunity to share experiences on the difficulties faced at local government level by both countries in areas such as crime, health, education and tax recovery. The meeting with the All Party Parliamentary Group for was well represented by members of both the House of Commons and the House of Lords including Chairman, Lord Foulkes. The Belize High Commissioner, HE Kamela also attended and spoke at this meeting.
The second day started with a tour of the Tate and Lyle Sugar Factory who have sourced cane sugar from for over 35 years. Meetings followed with Mott MacDonald, an employee-owned management, engineering and development consultancy serving the public and private sector around the world, and Crown Agents who are an international development company committed to global development and growth gave a presentation on the work they had done on tax reforms in the . The Mayors also met with Living Earth Foundation, an established NGO specialising in working with people to resolve their environmental and social concerns, and the South London Waste Partnership - made up of four local councils who are working together to provide improved and more cost-effective waste management services to their residents.
The High Commissioner for also joined the Mayors at a meeting with senior officials at the Foreign Office, and hosted a high-level reception for them at ’s Canning House at which she made a short speech welcoming the Mayors to the .
The visit has been seen as a huge success, and generated a great deal of interest from the companies, who were extremely impressed by the level of engagement by the Mayors on key issues relating to .

Posted by Linda Crawford at 1:21 PM