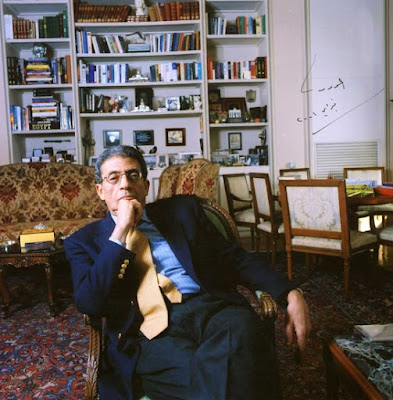 Amr Moussa, the Secretary-General of the Arab League
Weekly round-up of the Hebrew newspapers in Israel; covering the major events happening in Israel and the Middle East.


Last Friday, February 25th all Israeli newspapers lead with events in Libya.
Maariv, lead story, provides readers with an eye-witness account of events on the streets of al-Baida, while Israel Hayom headlines a comment by the White House, which says that the Obama administration has refused to rule out military action against the regime of Mu‘ammar Qadhafi.
Yedioth Ahronoth and Haaretz both lead with what they call new evidence of the massacre of civilians that the Libyan regime is accused of perpetrating.
Israel’s reaction to Wednesday night’s Grad rocket attack on Be’er Sheva continues to make headlines. According to reports in all the papers, the IDF has carried out several attacks on the Gaza Strip, with the latest on Thursday evening. Military sources say vehicles used by terrorists were targeted in Rafah in the Southern Gaza Strip. Palestinian sources reported that one person was killed and three others wounded.


On Thursday, Defense Minister Ehud Barak visited the Be'er Sheva neighborhood where the rocket fell and met with local residents. During the visit, Barak addressed the Iron Dome rocket protection system and said: ‘Iron Dome will be installed and spread out in the area once we prepare the artillery battery correctly. It will be done according to the IDF's considerations and while taking into account the security and protection of citizens.’ He added that the ‘Iron Dome is a very good technological achievement.’

On the diplomatic front, Israel Hayom reports that representatives of the International Quartet for the Middle East said on Thursday that they hope to resume the negotiations between Israel and the Palestinian Authority. Robert Serry, the United Nations Special Coordinator for the Middle East Peace Process, said in a statement that the Quartet representatives suggested that separate meetings be held with the negotiating teams of both Israel and the PA. During those meetings the core issues will be discussed, including negotiations on the borders of a Palestinian state, the question of the Arab refugees and the status of Jerusalem. ‘We are waiting for confirmation from both sides that they are willing to meet with the Quartet envoys in Brussels next week,’ said Serry.
Haaretz, meanwhile, reports on a crisis between Prime Minister Binyamin Netanyahu and German Chancellor Angela Merkel. According to the report, Merkel told Netanyahu during a telephone call this week that he had disappointed her and had done nothing to advance peace. The prime minister tried to persuade Merkel that he was about to launch a diplomatic initiative, explaining he is making a speech in two weeks in which he will outline a new peace plan. The German chancellor and her advisers, who have been repeatedly disappointed by Netanyahu's inaccurate statements and failure to keep promises, did not believe a word of what the prime minister told her, the source told Haaretz.
And finally, settler-run news service Arutz 7 quotes an interview published Thursday with Wassel abu Yousef, a member of the PLO Executive Committee, who says that the Egyptian effort to mediate between Hamas and Fateh has resumed. Abu Yousef said that senior Egyptian intelligence officer Muhammad Ibrahim will meet the Palestinian Authority senior leadership next week, and will also confer with leaders of other ‘streams and national forces’ in order to end the rift within the PA. In an interview with Arab news agency Quds.net, Abu Yousef said Muhammad Ibrahim's visit to the PA signals that Egypt has gone back to its role in sponsoring reconciliation between Hamas and Fateh. Ibrahim may arrive in Ramallah on Monday, said the PLO official, and is expected to call for a large meeting of the PA factions.
FROM THE ARAB WORLD NEWSPAPERS
When Qadhafi resorts to collective killings as a means of uprooting his opponents, he also describes them as no more than 'stray dogs' …not only because they oppose him, but because he deals with entire Libyan nation – as he has always has done – on this basis. In fact, he has been stingy in using even the leftovers of Libyan oil riches on behalf of his people, one third of whom live under the poverty line, while he continues to squander billions of dollars on his latest whims, illusions, and attempts to buy up the conscience of people across the world – 'Abdallah Iskandar in pan-Arab al-Hayat
Would it not have been better if [Qadhafi] had stepped down and left his people to determine their own fate and choose the state they want, free from violence and bloodshed, and without his son, Saifulislam, resorting to the threat: 'Either dialogue or civil war'? There is no doubt that 'our Brother, the Revolution's Leader' has proven his exceptional genius by continuing to rule since September 1st 1969, without being held accountable, creating an unprecedented method of remaining in power. It seems, however, that the moment of truth has arrived and that there is no longer any possibility of marketing the same old goods – Saleh Qallab in Jordanian al-Ra’i
Qadhafi's speech gives the impression that the regime in Libya is living its last moments. From his speech, it emerged clearly that his grip over many Libyan cities and areas has all but disappeared…But his speech also points to another terrifying matter. His speech means that the Libyan people are on the verge of terrible – in fact, terrifying – days. Only God knows how far these will go and extend. The Colonel has clearly threatened his people that he will fight to his last drop of blood. And this means that the regime will pursue a scorched-earth policy if the people do not comply with Qadhafi's demands – instead of the other way round –Tariq Homeid in Saudi Asharq al-Awsat
And finally it has been announced that Amr Moussa intends to run for the Egyptian presidency later this year when elections takes place. Moussa is well respected and positioned  to win.  He's known for his straight-talk and toughness towards Israel when he was Foreign Minister of Egypt.


Photo courtesy of arabist.net
Posted by Linda Crawford at 3:56 PM