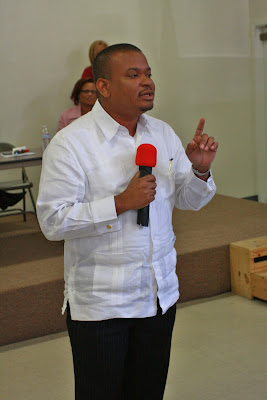 Departing on the morning of February 24th for Northern California, the delegation lead by Hon. Faber included his Deputy Chief Education Officer, Mrs. Babb, Consul General for in , Hon. Roland Yorke, and program coordinator Kim Hernandez, a volunteer at the Consulate. They were later joined by facilitators Patrick Lambey and Tim Palacio, both of .
Discussions were held with for Graduate Studies in , of at and in . Administrators from each of the universities expressed positive interests in building relationships with their respective institutions and the Ministry of Education in . The private institutions were particularly interested in beginning the necessary groundwork for setting guidelines in place to create partnerships.
Early Friday morning, the delegation, which also included Honorary Consul, Mrs. Linda Lewis-Brown met with representatives at the University of Southern California (USC), and Charles Drew College of Medicine and Science. These meetings, all in the area, went exceptionally well and several areas for future collaboration were identified and discussed.
expressed a willingness to proceed immediately with the necessary paperwork for establishing a partnership with institutions identified by the Ministry of Education. Particular interest was paid to nursing and pharmacological training for Belizean students.
Later that evening, Belizean Americans braved the storming weather to attend a public reception, coordinated by Ms. Theola Brookins, where the Minister socialized with members of the Los Angeles Belizean Community. 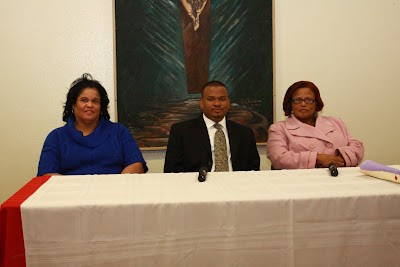 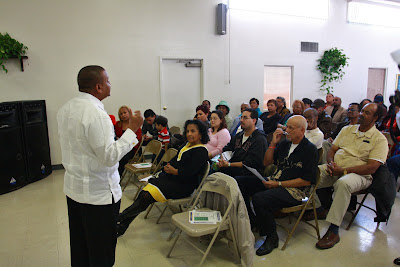 Billed as “a conversation with the Minister,” the Honorable Faber joined a group of young Belizean American professionals and graduate students at a Sunday morning breakfast meeting. The discussions were centered on the establishment of an effective mentorship program between high school students in and young adults living abroad. At the conclusion, the Minister, impressed with those in attendance commented, “I am particularly pleased and encouraged by the fact that we have obvious leaders in this group who want to give back and make a difference for Belize.”
On Sunday afternoon, the delegation returned to the auditorium of Christ the Good Shepherd for a town hall meeting, where Hon. Faber gave an overview of the visit. He spoke on Government of Belize initiatives and detailed the Ministry of Education’s programs on Teacher Training, Quality School Initiative and Removal of Corporal Punishment from classrooms. Belizean folk singer, Brad Pattico performed live and disc jockey music was provided by Logan Systems. The town hall meeting was broadcast live by http://belizemix.com/ 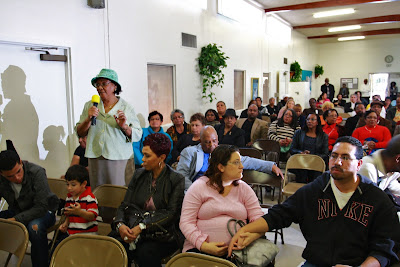 Town Hall meeting-Christ the Good Shepherd Church
Commenting on the attendance of both public events Consul General Yorke remarked, “I am particularly pleased with the turnout for both events, it is a direct result of the level of interest this present government is exhibiting in the value of Belizeans living abroad and the role they play in the future development of .”
The final stop on the five-day visit concluded with an action oriented meeting with Directors of The Rock Church in . It was agreed upon that a delegation will be visiting in late March to conduct a needs assessment prior to engaging into any action steps in its relationship with .
Speaking of his visit, Minister Faber commented, “things went well. I have no doubt that we will see measurable results. The relationship we are seeking is a reciprocal one, where not only Belizean students will benefit, but where these institutions can come to and learn from the archeological sites and marine environments we have; we insist upon a reciprocal relationship.”
Posted by Linda Crawford at 9:42 PM

Good story Linda..Education is getting more and more important all the time.