Previous “Spotlight of the Month” can be found in the archives.
February’s profiled personality is an individual who came from humble beginnings; from the neighborhoods of in to the halls of City Council in . He is intelligent and from childhood had a drive to succeed and make a difference in the lives of others. He has a passion for equity and fairness, and has used that to fight for his constituents in . He is a Prostate Cancer survivor, and has used that platform to educate and add to the understanding of the disease. He is an Engineer, an author and a motivational speaker as well. He has received countless awards and belongs to several organizations, making a difference in the lives of many. It is fitting that he is profiled for February, the observance of Black History month in the United States and Canada, because he is the first and only Belizean, Caribbean and individual from the African Diaspora, to be elected to the City Council of London, Ontario in Canada. This month’s profiled personality is Mr. Harold Lindsay Hughbert Usher, known by some in as Harry Usher. 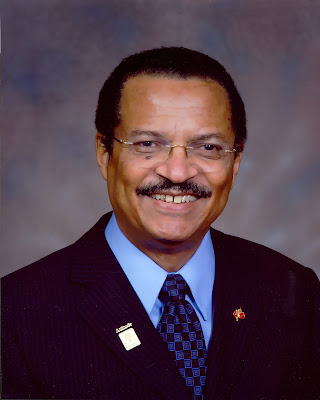 I'm a Belizean living in Michigan, really great to see you honor Harry Usher, I deem him a friend, an ancient family friend, and a role model, all the more meaningful because he is a Belizean and from such humble beginnings.

My complements to whomever wrote the article, it certainly captured one great trait that Harry has and that is perseverence...his "can do" attitude.

Only thing I would have added to the article so our folks can truly appreciate the magnitude of Harry's political accomplishments...the City of London, Ontario has a population of well over 300,000 and an annual budget in excess of $700million.

I'm truly proud of Harry, again more so because he is a friend and a Belizean.

Linda, keep up the good work you do.

Thanks Linda, this is a great story.

Keep up the good work you are doing!

GOOD JOB ON YOUR SPOTLIGHT OF THE MONTH LINDA. VERY INTERESTING! Because it took awhile to read, I was forced to listen to your music. Girl I enjoyed that rendition remix of Swing Low-Sweet Chariot. I was so unhappy when it stopped. It's what I needed to hear today. Thanks again and please keep up the good job you do.

Drop me a message the next time you play Swing Low ok! I will appreciate it. Hope you had a very fun Valentine's Day. Love always.

Wow this is good - I attended the same High School like him (Belize Tecnical College) a few decades after him. It is nice to see someone come this far. With hard work and dedication anything is possible.

Hola Linda,
I could not have said it better my self in describing my friend Harry. I am a Belizean myself and have the out most pleasure to know Harry personally as a friend and Professionally. I have seen him in action in many activities which we both have taken part in the City of London.
I have the out most respect for him and admire his accomplishments.
I am proud to call him my friend and proud to be from the same country we love so much, Belize.

I was pleased to see the Belizean Spotlight for this month was my Uncle Harry. I made sure I read it all and shared it on my Facebook wall as well.

Things like these always interest me, even more so when I know it is a fellow Belizean.

I think my Uncle Harry is a wonderful role model and inspirational speaker when it comes to knowing what you want and doing what you have to do to achieve those dreams.

Thanks to Ms. Hernandez for the wonderful write up she did on Uncle Harry. I thank you all for the work that you do when it comes to people, news and events concerning our homeland Belize. I know a lot of Belizeans abroad really appreciate being connected to Belize somehow by your write ups.

As my Uncle Harry always says, "Have a Sensational Day"!!

Greetings! I hope this finds you and all who read your wonderful material, in good health, a cheerful spirit and a positive frame of mind.

I am humbly moved, honoured and grateful to have been chosen as your Belizean Spotlight for February 2011. I read the entire post and believe me, although it was about me - true is every respect - I was inspired.

Thanks you very much for chosing me and thanks to Kim Hernandez who did a superb job in putting the material together. I hope God will continue to give me strength, health and energy to continue the work I do and to continue my MISSION in life "to inspire and empower individuals to better their personal disposition or quality of life."

I pray also that you will continue to do the Good work that you do via this POST. It is an enormous task, but it serves a lot of people. I am proud of you and the work you do.

God bless you as you too continue to be SENSATIONAL.

Wonderfully interesting account of Harold Usher. Loved reading and learning more about this amazing friend of mine. Thanks!