ANIMALS ROAMING ‘BOUT IN THE VILLAGE 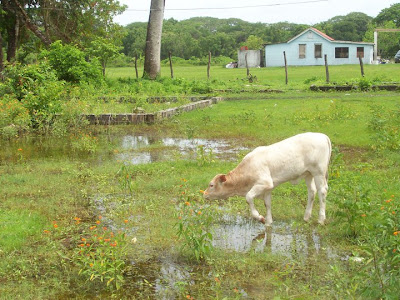 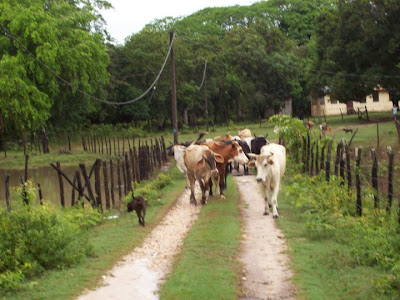 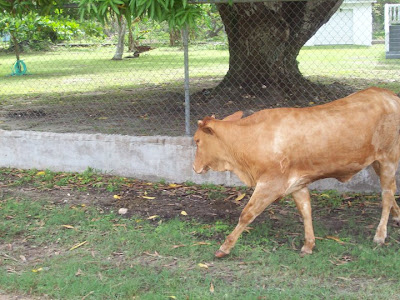 On a recent visit to , I was dismayed to see so many animals-horses and cows-roaming around in the village. While heading to the north of the village one day it was nearly impossible to drive through my favorite alley. There was a herd of cows coming at me with no intention of turning around. In fact, I had to reverse in this narrow alley because they would not let me through; the animals couldn’t control their behavior once they were outside of their pens. 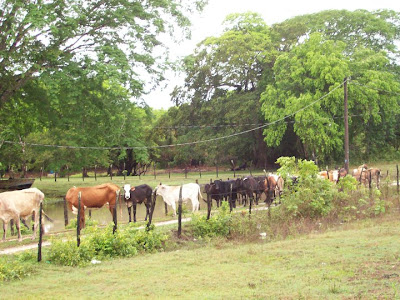 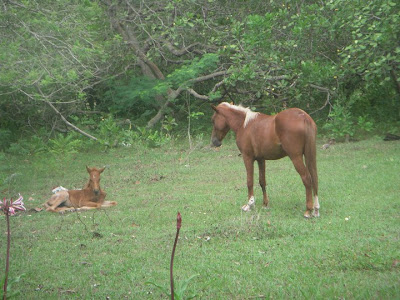 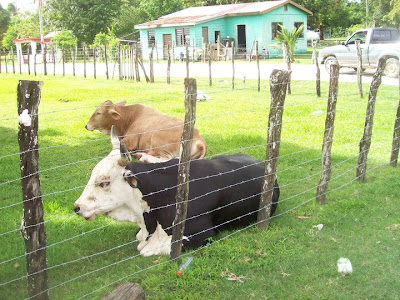 Livestock production in has been a way of life for many families since the village was founded. The main animals include horses, cattle and pigs. The latter two were reared to supplement income or in some cases being the only source of income for the family, whereas horses were used as a means of transportation for many, including being used to herd the cattle, which were allowed to graze on the open range. Whenever there was a surplus of horses in a family, the extra horses were sold to supplement the family income.

Initially, they were allowed to roam the village aimlessly, feasting off food such as cashews, mangoes, oak seeds, palmetto seeds, plums, berries, fish, and the occasional treat of venturing into farmers’ plantations and devouring crops. They even go as far as wandering aimlessly into the cemetery eating down the flowers from a freshly dug grave. This situation was not sustainable and some farmers resorted to the shooting of the pigs whenever they were fortunate to meet them in their farms. The owners of the pigs realized that the situation could not continue and some pig farmers choose to get out of the pig rearing business as it was not profitable to raise them enclosed. Today only about four farmers in the village rear pigs. 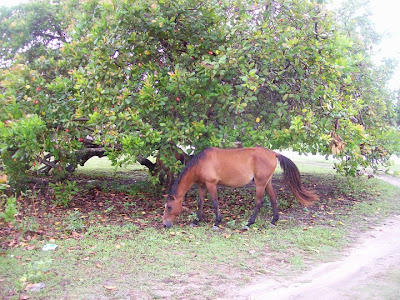 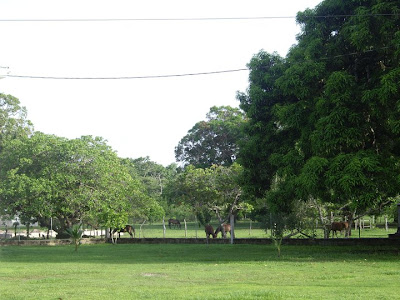 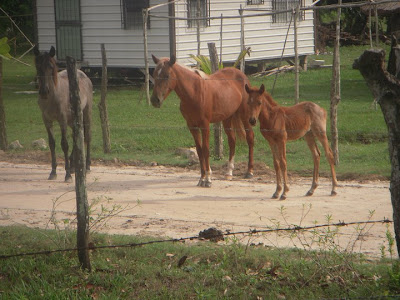 Cattle on the other hand, have been allowed to roam freely, and they continue to be a contentious issue. This problem has been a very heated topic over the past five years between owners and villagers. However, most of the cattle farmers have improved their private pastures so that their cattle graze for the entire year without molesting the villagers.


It is still a tradition among some of the farmers who have their cattle enclosed to graze their cattle in the savannah in the dry season, but even this is now coming under attack by the Belize Audubon Society. 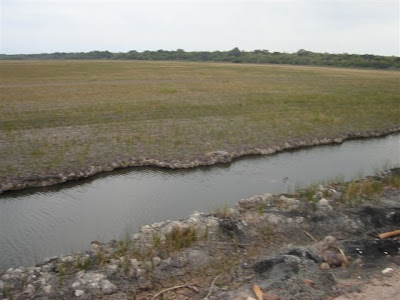 Savannah at the Crooked Tree Lagoon 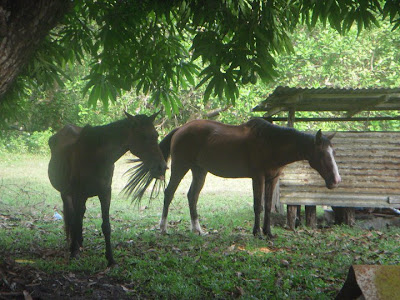 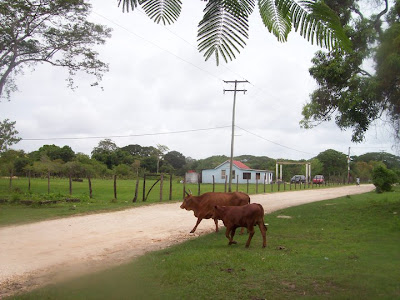 Do you think livestock should be restricted in the village? Would love to hear from some of the folks living in Crooked Tree. 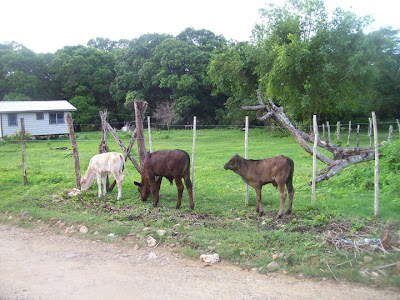 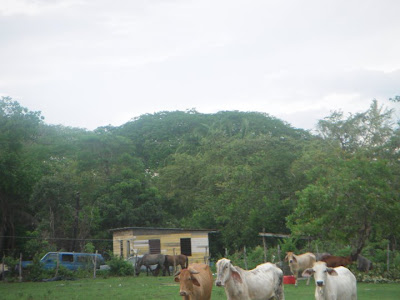 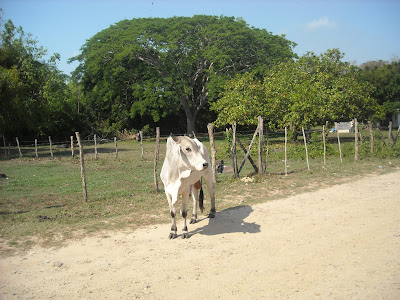 All photos by Winfield Tillett
By Linda and Johnny Gillett
Posted by Linda Crawford at 3:46 PM

Email ThisBlogThis!Share to TwitterShare to FacebookShare to Pinterest
Labels: Animals in Belize, Animals in Crooked Tree Village, Animals in the Village, Cashew, Livestock, Living in Paradise

i love the photos,,,just miss home so much keep up the good work

It would be nice to think my dad played where your photographs have been taken,when he was a small boy.Thank you.

Great post Linda and I absolutely love the photos. I think it is pretty neat that the cattle get to roam around...but how do they keep up with whose cattle is whose?

Actually, the animals roaming in the village looks quite quaint. This should be treated as a way of life for the village. Looks beautiful!!

The pictures matched the narratives and tells the story. You see, these are thinks that people on the spot lives with every day and are not noticeable. When you put it like this, family pride takes over and you will see action without hurting feelings.

Hi All, thanks so much for your visiting and your comments.

Val, I'm sure your dad played among all these beautiful places in CT; if you don't mind, can you tell me the name of your dad. You can send me an e-mail.

Debs, it's pretty easy to tell who's who among the animals. Each of them have a brand with the owners initial on their legs. If you look at picture #3 you will see a diamond brand just on the leg of this little red cow. Inside the diamond is the initial.

Very unique indeed! I don't know what I would do if I was facing a herd of cattle.

An anonymous person said, "someone needs to curtail them animals." LOL!

I think that not only should these animals be restricted, but they should also pass a law whereby if an animal that does not belong to you is found on your property, you should be able to dispose of it in any way you deem fit. If someone decides that they want to rear these animals they should know exactly what they are going to have to do to keep them secure and well fed without them being a pest or plague to those who do not want them around. I personally release my pitbull to deal with them when they venture onto my property.

I agree with most of the comments that was posted, this is a village and this is what village life is all about. Everyone and everything that God put on this earth has its purpose. Like Linda mentioned, the animals are helping to keep the village clean by feeding on the wild grass and the wild bushes. We grew up in this lifestyle and except for the few chases from a couple of the cows, we survived and I wouldn't want it any other way. Of course for the people who are affected by this, then I can see their side as well. Love the pictures Linda.