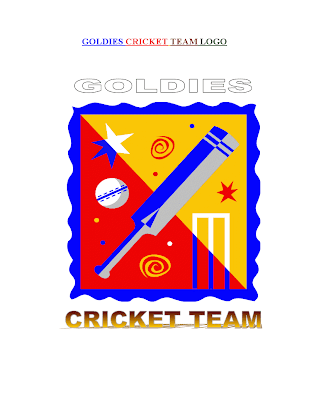 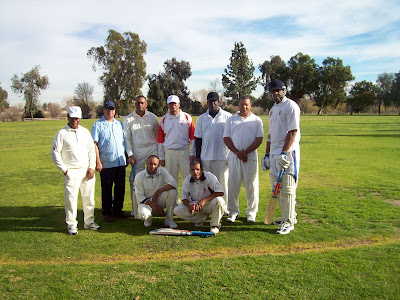 Click on photo to view
The Goldies Cricket Team of Los Angeles played its first cricket match since its formation in July, 2010 at in , , against a select side from the . The game was played under the Southern California Cricket Association (SCCA) rules which mandated that a “white”cricket ball is used for all official matches starting this year, instead of the traditional “red” ball. They played a twenty-five six ball over match and each side had decided to play three players of Indian descent from the Pegasus Club, an upper division level team. L.A.P.D. Officer and SCCA trained umpire, Sheldon Nicholson, was the lead umpire for the game. The Goldies Team was captained by Bobby B. Sutherland, who also organized the game and provided the music, with the help of a lively Jamaican radio host, Raddie, who rocked the crowd with West Indian, Jamaican and Belizean latest hits as he and Big-Up Bobby B announced the progress of the game. The traditional Belizean dishes and pastries, plus Derrick Baizer’s finger-licking out-door B.B.Q., were being served to all free of cost in a picnic-like environment. 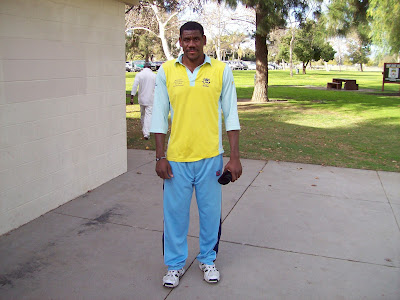 Jamaica's Speed Bowler and Batsman
The Goldies Team batted first, leading off with Winfield Tillett and one of the Indian guest players. They faced the USA National Side Star Bowler from Jamaica, Elmer Hutchison, who had a twenty-two yards run-up with a smooth bowling delivery and he was as fast and professional as they come, with great in and out swing capability. "We batted out almost all of his allotted five overs before he bowled me off my pads with a fast pace in swinger. Our team went on to bat out the twenty-five overs, scoring one hundred and fifty runs for eight wickets, with Jason Broaster from Double Head Cabbage top scoring with thirty-five runs" said Winfield. Bobby B., who is also the Goldies' captain for this game, was bowled in the last ball as he tried to chance it to add to the score, while Tony Jones batted not out. 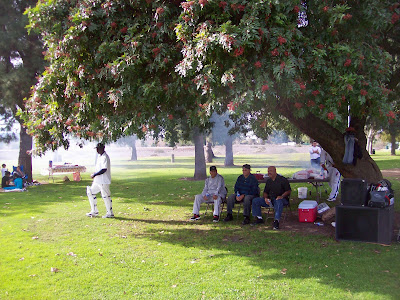 Supporters and Fans
Following a “tea break” of good food and lively party music, Goldies took the field opening up the bowling with Bobby B. from one end and Jason Broaster from the other. At first their bowling was not very effective with those upper division batsmen who were used to batting those rapid speed bowling. Hutchison, who was the most effective bowler, also did the best batting for the side. However, the Goldies were able to retire the entire opposing side for one hundred and forty four runs, with Bobby B. taking four wickets, Ermond "Bump" Westby taking three, the Indian Spin Bowler taking two and Jason taking one. The game finished just before dark and everyone packed up and went home in a good mood. Except the people who lost.

Never watched a Cricket game, but I am sure the B.B.Q. was delicious !!

Am happy to have being at this game to support my family and new found friends..can't wait for Cricket Season to start-up

Thanks for the sharing of such information we will pass it on to our readers.