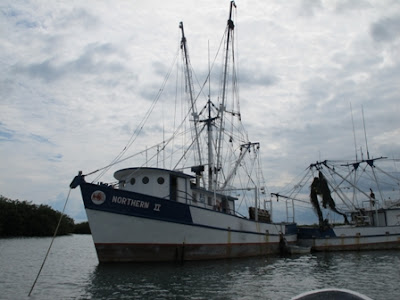 A huge win out of today: All forms of trawling have been banned in the country's waters. And we’re proud to say that our colleagues inBelize played a crucial role in making it happen.
While there had been a call to ban the destructive fishing gear several years ago, the political will was lacking. But when UNESCO recently threatened to strip the Belize Barrier Reef of its World Heritage Site status, the government took notice. Oceana in collaborated with Belizean Prime Minister Dean Barrow’s administration to negotiate the buy-out of the two shrimp trawlers.
Shrimp trawls are notorious for the amount of bycatch (untargeted catch) they haul in. Thousands of sea turtles, marine mammals and untargeted fish are caught in shrimp trawlers around the world every year. Meanwhile, bottom trawlers’ weighted nets effectively raze the ocean floor with every pass, destroying sensitive corals and anything else in their way.
Particularly at risk is the Belize Barrier Reef, which is part of the Mesoamerican Barrier Reef System, the second largest coral reef system in the world after ’s . The reef is a destination for divers and snorkelers around the world -- and it is also increasingly unhealthy, according to a new report.
With this ban, which goes into effect December 31st, has become one of the first countries in the world to institute a complete and permanent ban on trawling in all its waters. ( established a ban about 30 years ago, but despite ongoing overfishing, last year the country opened up selected areas for trawling.)
Vice President for Oceana in Belize Audrey Matura-Shepherd said that this is a historic milestone for Belizean fishermen and the environmental community because “it is indicative of the partnership that could be forged for the betterment of the people and country of ”.
Congrats to everyone who helped make this happen!
Via:http://na.oceana.org/en/blog/2010/12/victory-belize-bans-trawling
Photo:© Oceana/Xavier Pastor

Posted by Linda Crawford at 5:22 PM