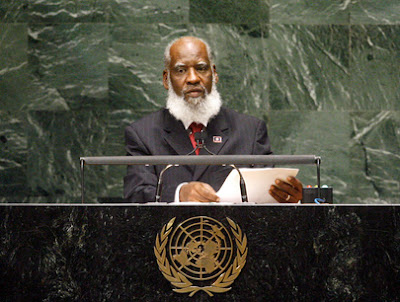 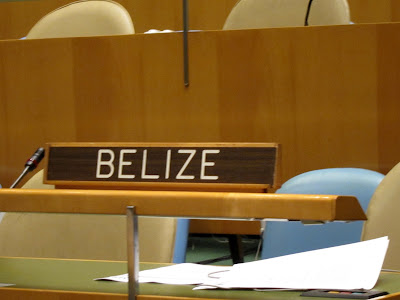 Belize's seat in the General Assembly Hall at the United Nations

On Wednesday, September 29, 2010 the Foreign Minister of , the Hon. Wilfred Elrington addressed the 65th United Nations Annual General Assembly.
Hon. Elrington is the Minister of Foreign Affairs and Foreign Trade for . He delivered his speech in a forthright and forceful manner. He said that smaller and poorer countries like needs a United Nations that represent and share a greater role in the world body; making it more representative of the world and its people.
“We need a United Nation that reflects more equitable north-south representation that can effectively deliver. The reform we seek goes much deeper than the changing of the guards. It is a reform that would rebuild trust amongst each other and confidence in the system.”
The foreign minister gratefully thanked the traditional donors for their invaluable assistance, but highlights the effective partnerships with , , and . He also sighted ’s relationship with as a model based on partnership, “with the help of the Government of , is steadily developing its capacity in agricultural research, aquaculture, education and social sector investment.”
Please click on link below to view the entire speech!
http://gadebate.un.org/View/SpeechView/tabid/85/smid/411/ArticleID/279/reftab/235/t/Belize/Default.aspx 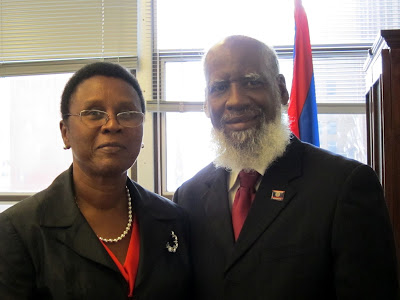 Ambassador Nestor Mendez, Honorary Consul in Los Angeles, Linda Lewis and Hon. Elrington
A group of Belizeans were present to witness the address by the Foreign Minister, myself included. We met at the Belize Mission in and proceeded to walk as a group for about three blocks over to the United Nations headquarters in . The traffic was light and it was one of the most gorgeous days in the City. This was my first visit to the UN and I was excited to learn about this international body and some of the challenges that it faces around the world. 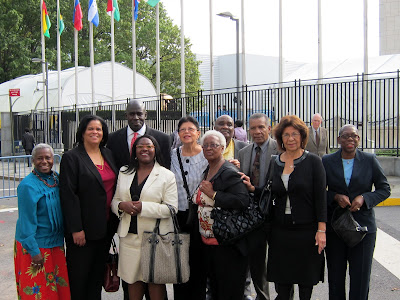 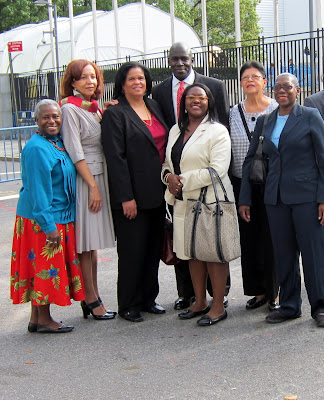 Some of the Belizean delegates
Janine Coye-Felson, Ambassador Charge D'Affairs of the Belize Mission to the UN and Hon. Foreign Minister 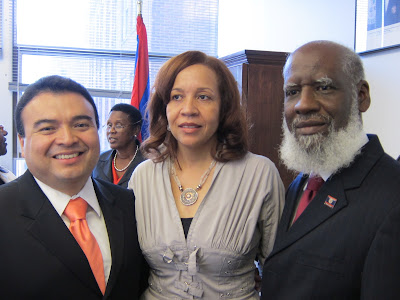 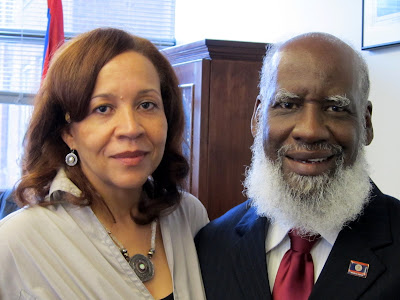 Meeting Hon. Wilfred Elrington at the Belize Mission to the UN 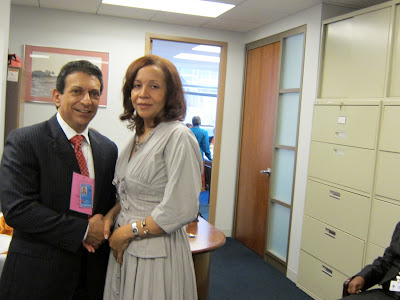 Each year representatives from the 192 member nations of the United Nations meet to discuss issues of international concerns. Some of the topics discussed in the past have been nuclear proliferation, terrorism, sanctions on , climate change, women’s rights, peace keeping, poverty and many more.
There are 6 official languages at the United Nations and seating is said to be alphabetical. I don’t know how that works because ’s seat is somewhat in the center right and  is at the front right.
Because the UN is going through major renovations, the delegation was ushered into a huge tent for security checks by guards that seemed to be dying from boredom. We were then escorted to the General Assembly Hall where we settled into our seats without saying a word.
Since this is the second and final week of the General Assembly, the major players from around the world had already delivered their addresses and speeches. At the UN there’s a 13 members protocol office to work on disputes or mediate on whom gets to speak first; whether a leader shakes hands or bows, whose flag goes where and when or say what at these General Assembly meets. Speakers also get to speak in order of precedence; Heads of State, Crown Prince, Foreign Affairs Ministers, then in order of request received. 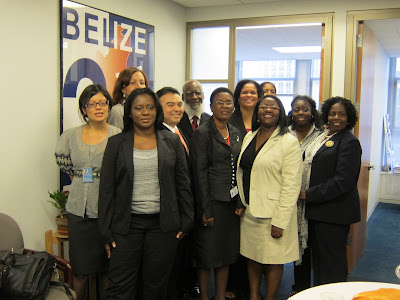 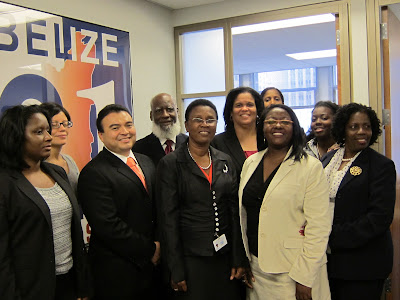 Delegates at the Belize Mission 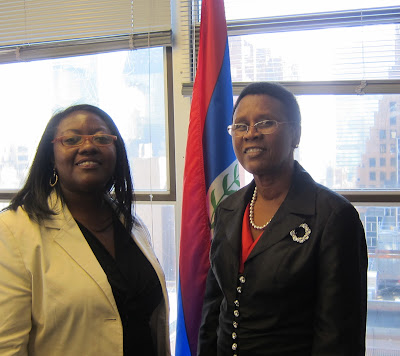 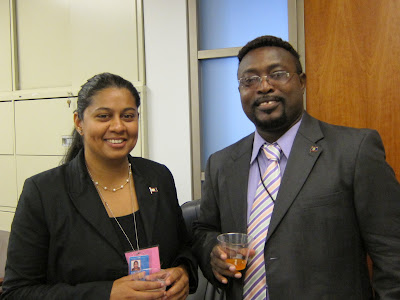 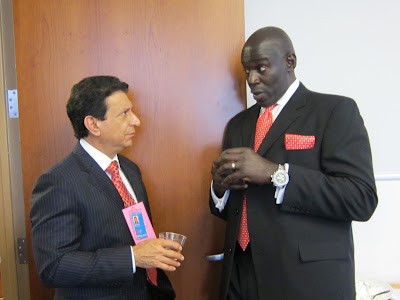 Ambassador Martinez with Mr. Pipersburg
This year’s UN goal is called The Millennium Development Goals; it sets an ambitious agenda for 2015- to end, eliminate or cut poverty in half, fight diseases and hunger and for developing countries to have more access to drugs to fight HIV.
This body of nations faces many challenges and ills from terrorism, human rights abuses by member nations, water shortages and lack of peace in the .
Some say that the UN is a bastion for socialist and terrorist’s enablers; others say it’s a good idea, but it doesn’t work. Nevertheless, it would be worse without them. We as Belizeans were raised to respect the institution as one that member countries, no matter how small have a voice. Even though we were sitting in the lower gallery, those in attendance with the delegation all expressed a sense of great pride and respectfulness to be present representing our country, while the Foreign Minister spoke on behalf of all Belizeans. 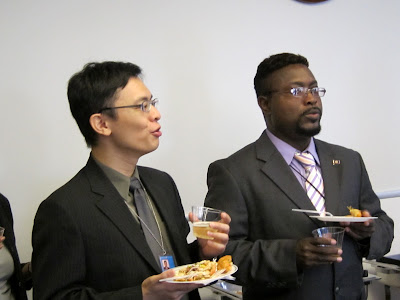 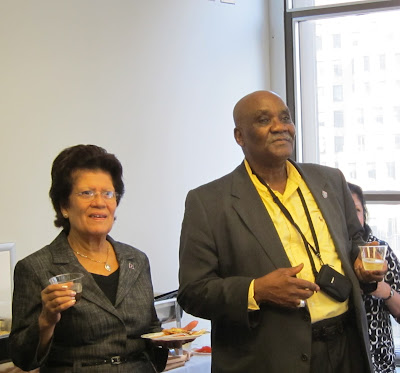 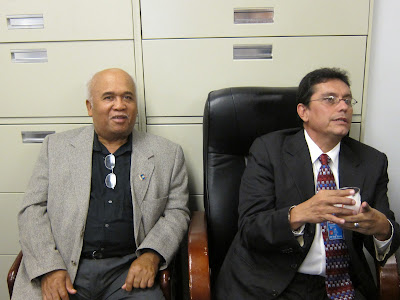 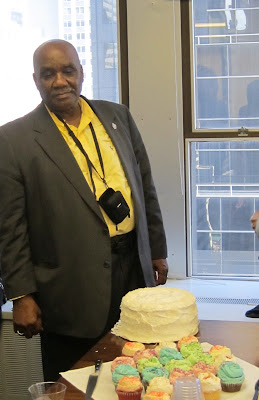 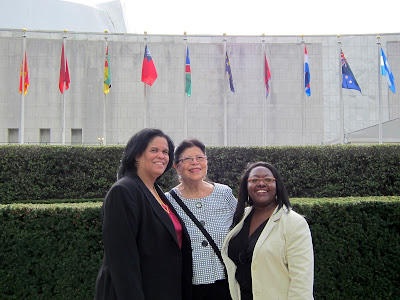 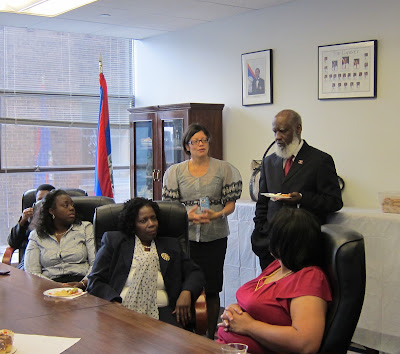 Please click on photos to view
Posted by Linda Crawford at 9:43 PM

Hi Linda, the spech is great and the pictures as well. Congratulations for being in such an honored place.

Great article and pics, Linda. Looks like you had a great time.

Whatever is or is not achieved at these meetings, the most important thing is that our country is represented. Congratulations, Linda on being one of the few that was chosen to be at such a prestigious gathering. You played the part beautifully by the way you were dressed and carried yourself. Great Article!