FROM BELIZE TO SCOTLAND IN 1941

I thought this short documentary to be really interesting and enlightening!

Using historical materials and personal interviews, the documentary tells the story of some of the over 800 men who traveled from British Honduras (now Belize) to Scotland in 1941 to work as foresters. Their stories and the stories of other Black men and women from the commonwealth can be seen at the Imperial War Museum in London.

Approximately 16,000 men from the West Indies volunteered to fight for Britain in the First World War, and over 10,000 servicemen and women answered the call of the "Mother Country" during the Second World War. Thousands more served as merchant seamen. From "War to Windrush" is an exhibit that explores how, despite facing discrimination during their service, many former Black West Indian servicemen and women and civilian war workers returned to settle in Britain after the Second World War. 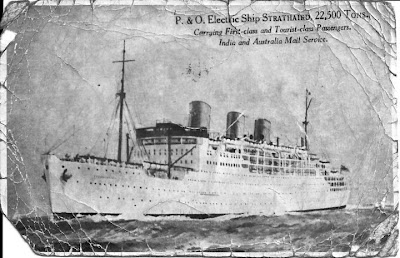 From the archives courtesy of Chris Slight -- the Ship that brought the first Forestry workers (also known as the Treefellers) to Scotland.
Posted by Linda Crawford at 1:08 PM

Linda, this is so interesting. My uncle, George Perriott was also in World War II. He said when he was in Jerusalem he chipped a little piece of rock off the entrance to what they said was Jesus' tomb. He always told me that story as a child growing up. He was very proud of being in the army and being overseas.

Very interesting Linda. It would be nice to do a Family investigation to see if we have family that
volunteered.

I will check out the website of the Imperial War Museum. Very Interesting.

Nice article Linda, and thanks for all your work.

Linda, I am thinking this is the best one yet. You wouldn't believe the discussion this video sparked with my family. I am humbled to learned of our belizeans who left their country to serve in Scotland. I am also sad at the same time, thinking of their family that was left behind and for some never to see them again. This video should be shown at our schools and on the local tv stations so that these men be remembered as the heroes they are. Thank you for the History lesson.

You and I seem to think a lot alike. I am in the process of gathering the names of the people from Belize who server in the 2 great wars.

This will help a lot!!

Thelma said..
Thanks Linda for showing this great video, only last month I was looking on the internet for info on The British Honduras Regiment after I found my fathers badge. He used to tell me of the fun they used to have in Scotland and how easy it was cutting the soft wood. They also used to water down the rum and sell it to the locals. Sadly one of the boats comming from Belize was hit by a German tropedo, my father lost many dear friends. He chose to stay in the UK, and said if they wanted to go home they were offering a piece of land. He thought he could make his fortune here. The British Government has only recently started to recognise those brave men and women from commonwealth countries who gave up their lives to come and support the war effort.Without those thousands of people the British would have lost the war.

Hey Linda, my compliments on your site, I find your blogs and posting very interesting, informative and in tune with almost everything. Very free thinking style and open mind opinions. A terrifc job i must say...

Linda great post. Cherry I agree with your sentiment. This did take it's toll on the family if they were married. My grand aunt just passed away. She is one of the wife that was virtually abondoned by her husband going to Scotland and not returning. So she had to care for her children and subsequently her grandchildren as a single parent.

This was really, reall,y really interesting!! Thanks so much for posting--where/how did you find it?

(and i love the village life cashew processing you tube video, too....absolutely wonderful,..!!)

if this thread is still alaive you might be interested to know that the documentary 'Tree fellers' about the BHFU and some of the men who stayed in Scotland is now available on line at http://www.asylumpictures.com/tree.htm

Robin McPherson, thank you very much. Mr. Sam Martinez is the only Belizean still alive and today is his birthday; he is 104 yrs young.