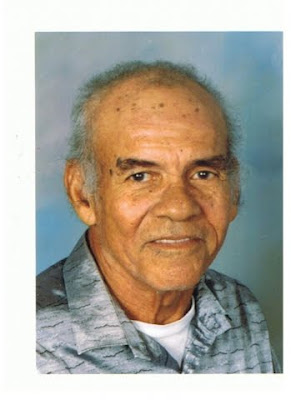 Winston Nathaniel Crawford 1924-2002
Today is Fathers's Day, and I would like to remember my dad, Winston Nathaniel Crawford. He was a very hard working dad who did whatever it took to care for his very large family. He was kind, wise, and a stern disciplinarian who instilled in us the values of compassion and hard work. Dad was also a great story teller who spent many nights weaving varied tales of Belizean Folklore like that of "Tata Duhende" and ghost stories that would send shivers down our spine.  Greatly missed by all his children and grand-children!!!

Father's Day at 100: How It Began, Why Dads Gets Fewer Gifts
As Father's Day hits its first centennial today, sons and daughters around the world are expected to open their wallets wider-slightly- in celebration. Because of the slowly recovering global economy, people are expected to spend about 4 percent more than in 2009 on cards, ties, tools, clothes and other Father's Day gifts. But the first Father's Day, a hundred years ago, was decidedly humbler and refreshingly non commercial.
Father's Day was only officially made a national holiday in the U.S. in 1972, when President Richard Nixon declared it to be the third Sunday of June. But the holiday actually traces its origins to early 20th-century Washington State.
Inspired by a Mother's Day sermon she heard at church in 1909, Spokane resident Sonora Smart-Dodd—one of six children being raised by a single dad—also wanted to honor her father. She encouraged local churches to institute the first Father's Day observance the following year, and the idea caught on. Psychology lecturer Nicole Gilbert Cote at the University of Massachusetts in Amherst, who researches Father's Day phenomena, noted that U.S. President Bill Clinton in 1994 launched a gender neutral "Parent's Day" on the last Sunday in July.
"Ultimately, Parent's Day did not take off as people had probably hoped and expected," she said. "And that makes perfect sense to me, because Mother's Day and Father's Day have such commercial appeal."
Some are taking special steps to celebrate the Father's Day centennial. The Coeur d'Alene Brewing Company in Coeur d'Alene, Idaho, which is about 40 miles (64 kilometers) east of Spokane, brewed a special Papa's Pale Ale for the occasion, for example.


George Stromberg, the brewing company's president, told the Spokesman Review that the local visitor’s bureau put him up to the Father's Day task. "They thought there was a natural connection between dads and beer."

Even though fathers will likely receive more this year, they'll still stay way behind moms, according to the National Retail Federation, a Washington, D.C.-based trade group. For instance, in 2009, Father's Day cost individual consumers an average of $90.89, while Mother's Day spending was $123.89.
The retail group expects gift givers to spend an average of $94.32 on Father's Day today. For moms, shoppers shelled out an average of $126.90.

"Dad is a little more laid-back and easier to shop for," said federation spokesperson Kathy Grannis. "His gifts usually range from a simple tie for work to a new spatula for the grill, all of which can make dad very happy."

Mother's Day gifts tend to be more luxurious than Father's Day presents—jewels, flowers, a trip to the spa, or dinner at a restaurant, for example.
Easy to Please on Father's Day
Still, the smiles are likely genuine when millions of fathers across the U.S. open boxes, peel back tissue paper, and admire their new neckties—still among the most popular Father's Day gifts—said Gilbert Cote, the psychology lecturer.
Her research shows that even though dads get less attention on Father's Day than moms do on Mother's Day, fathers are more likely to be satisfied on their holiday.

Part of the reason seems to be that moms expect to be relieved of stereotypical chores such as cooking and cleaning up on Mother's Day, but that doesn't always happen.

"The bar is lower, and Dad is OK with that," Gilbert Cote said, adding that the way families—even those that espouse egalitarian ideals—celebrate the two holidays reinforces such stereotypes.

The most popular gift for Dad—and often the only one he'll get—is a Father's Day card. All told, an estimated 93 million cards are exchanged on Father's Day, according to the Hallmark card company.
This makes Father's Day the fourth largest card-sending holiday in the U.S., behind Mother's Day (141 million), Valentine's Day (152 million), and Christmas (1.8 billion). In total, according to the retail federation, people will ring up about $749 million in cards for this year's Father's Day.
Fifty percent of Father's Day cards are purchased for dads and another 15 percent for husbands. The remaining fall into a broad "other" category, which includes grandfathers, sons, brothers, uncles, and other loved ones, according to Deidre Mize, a Hallmark spokesperson.

"It might be someone who served in a father role," she said. "Or it could be a stepdad."

Despite all the cards given on Father's Day, Hallmark didn't have anything to do with the origins of the holiday, Mize added.

Very Interesting Linda, I am always sure that I will learn something from your blog. Like Uncle Winston, My dad was the same, always working overtime to provide for his family. Working hard and providing for us was true love. Only wish that they were still here with us.