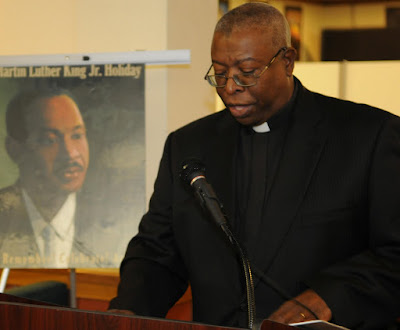 Deacon Nieves J. Hernandez
Deacon Nieves J. Hernandez is an extraordinary Belizean, an individual that has the respect and admiration of all who knows him. He has freely given of his time and efforts to his fellow Belizeans. He is filled with spiritual good will and possesses a deep and unwavering faith. He is an educator and a Permanent Deacon in the Roman Catholic Church.


Deacon Nieves Hernandez was born on January 9, 1953 in Dangriga, Stann Creek to Dominga Hernandez. His father Nieves J Hernandez Sr. died in 1952, before Nieves was born. This left his mother with the demanding task of raising four children. His mother would later remarry, but life continued to be a hardship for the family.


As a child growing up, he remembers his mother and eldest sibling going off to the farm and later to the market to sell peanuts, bread, bun and other commodities. Life was difficult for the family, but the household was deeply spiritual, full of trust and faith in a higher power. His mother had always instilled in him that God would provide. She was an inspiration and a role model for him. He gives thanks to her for becoming the person he is today.


Nieves migrated to the United States in 1974. He was only 19 years old, and had come to join his mother who was already in New York City. Shortly after he came, he enlisted in the United States Marine Corps in 1975. It was an eye opening experience for him; he was in a new country surrounded by a new culture and practices. And here he was a new enlistee in one of the nation’s more demanding armed forces. He admits that at first it was difficult, having to adapt to military life and traditions, but like a real trooper, he settled in and became a proud marine.


Nieves remained in the Marines for 4 ½ years. In 1979 he was in the stages of leaving active duty after completing his first tour with the Marines, when he came across a program being offered by the Navy, but opened to all branches of the armed forces. He applied for the position of a Chaplain’s Assistant in the Navy, with the understanding that if he wasn’t accepted, then he would become a private citizen once again. He was accepted to the program, and transferred to the United States Navy, where he remained on active duty for the next 17 years. In 1995, after 22 years of service for the United States Armed Forces, he retired honorably from the Navy.


His military assignments include three tours of duties in Washington DC.  First in 1975 directly after his boot camp training in the Marines, and then again in 1985 for the Navy. He did sea duty aboard the U.S.S. EMORY S. LAND (AS-39) in Norfolk Virginia. He was also Station at the U.S. Naval Station in the Panama Canal for four years from 1988 – 1992, and finished off his career stationed in Yuma, Arizona from 1992-1995.


Over the years, Nieves has acquired several educational degrees in his quest for constant learning. In February 1991, he earned his Master of Business Administration Degree (MBA) from Nova Southeastern University, Fort Lauderdale, Florida. He also completed a Master of Education Degree in Special Education from Northern Arizona University in May 1997. In March 1987, he received a Bachelor of Science Degree in Management/ Human Resources from Park College, Parkville, Missouri. And an Associate of Science Degree in Business Management and General Studies from Northern Virginia Community College in the Summer of 1982.


Nieves is one of only three Belizeans serving as Permanent Deacons on the West Coast. Permanent Deacons in the Catholic Church are men who will not go on to become priests. Many of them are married, have children, and hold secular jobs. They receive the Sacrament of Holy Orders from a Bishop, and therefore become a member of the clergy. They are also ordained to a ministry. As a Deacon, one proclaims the gospel, preaches at liturgical services, assists at the Eucharistic Liturgy in a direct and distinct role, distributes the Holy Eucharist as an ordinary minister to the faithful and carries it to the sick, and those that are confined to their homes, celebrate the Sacrament of Baptism, leads public prayer services, witnesses and blesses marriages, and officiates at the Rite of Christian Burial.


A deeply spiritual person, his journey into the deaconate started in September 1992 when he was selected for Deaconate of the Diocese of Tucson. He had always had a desire to do some service for the Catholic Church which he was raised in. In August of 1994, the Bishop of Tucson conferred upon him the Minor Ministries of Lector and Acolyte. In September 1995 he was admitted to Candidacy. The Bishop of Tucson, the Most Reverend Manuel D. Moreno on May 11th 1996, ordained him a permanent Deacon. As a Deacon he is regularly called upon by the Belizean Community to officiate at funerals, weddings, and baptism in Los Angeles and New York.


Nieves J. Hernandez is an inspirational figure. He is disciplined, and possesses a deep strength that has taken him to many heights. His belief in a higher power has allowed him to live a life of service to others. He is socially conscious and is constantly searching for ways to improve the lives of those around him. His teaching skills have fundamentally help his students, for his care about their educational well being and learning skills are well demonstrated. He is a wonderful husband, father and brother; a person that has never forgotten where he comes from, and thus always gives back. He is a son of Belize we should all be proud of. We wish him success in all his present and future endeavors.


By: Kim Hernandez
Excerpted from LABEN News on Jan/Feb Profile 2004

Email ThisBlogThis!Share to TwitterShare to FacebookShare to Pinterest
Labels: Belizean in US Military, Belizean Personality, Belizean Spotlight, Bishop of Tucson, US Armed Forces, US Marines, US Military Chaplain

This shows what hard work and committment can accomplish.

Thank you for all the work you do and all the information about Crooked Tree, Belize and the people that you profile. I enjoyed every single one and learning so much about Belize.

This is a great profile!!

This Spotlight was well written. Deacon Nieves is quite an accomplished man. I am impressed with his education. I am also inspired by his work as a deacon in sharing the word and works of our Lord.

Linda you and your team are doing a great job.