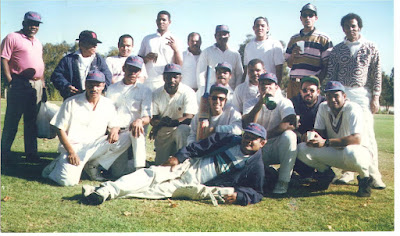 Posted by Linda Crawford at 9:44 PM

I had the opportunity to watch Cal-Bel in three different games eventhough we had to leave before any game was completed. The games were played on Sundays and we had to leave to get back to Phoenix. It surprised me a lot because it was just like watching Brilliant in Crooked Tree Village. I didn't know a lot of the players but I remember Jamesie, Mike and some others. We felt quite at home with them and there were a lot of supporters out there.

Thanks Winfield for all the information that I wouldn't have known otherwise. At the time I think I saw 2 Indians playing with Cal-Bel and I was wondering why because they were not from Belize and now I know.

I really enjoyed this article. The story of Cal-Bel is one that should be featured on ESPN in my opinion. Thanks for this.

Yvonne Herrera
I have never seen CAL-BEL Cricket team played, but remembered the old days watching the Brilliant Cricket Team in action. Thank you Winfield, I thoroughly enjoyed reading your most informative Post.

Thoroughly enjoyed this article, just a few days ago I was mentioning to a friend I would like to know more about the CAL-BEL team. This is great.

This is a very interesting and informative article about Belizean cricket in California.

I read the post and the only thing that ran in my mind was, finally the cricket fans are going to be in touch with we were accomplishing as cricketers abroad.

As for me, Francis Sutherland leaving Cal-Bel Cricket Club to go to the Caribbean Club is because I am very competitive. I left the third division to compete in the higher division of cricket, which is the first division.

Most of our fans don't know that I had the opportunity as a Belizean to play pro-cricket. I also tried out for the USA Cricket Team with the Southern California cricket selection. Just to let all Cal-Bel fans know, I'm still riding with the team.

To all fans, Peace!!

This was a wonderful blog. I enjoyed learning about the history of Cal-Bel Cricket Club. As a past president of the Club, I will have to agree that the 80's and 90's were great times. Rest assured that the players of Cal-Bel have left their "mark" in the history books of S.C.C.A.