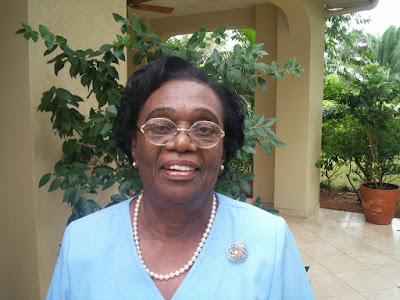 Miss Elaine earned a Degree in Social Work Practice from the Union Institute in Cincinnati, Ohio, USA. , has an Associate of Preceptors degree from College of Preceptors in the United Kingdom, Diplomas in Social Welfare and Administration and Applied Social Studies from the University College of Swansea, Wales, United Kingdom, and a Trained Teachers Certificate from the Belize Teachers Training College.


Although Dame Elaine Middleton has achieved a great deal in her life time to be proud of, I think she is most proud of the legacy she left to her own children, and the 8 wonderful grand-children who call her grand-mother
Posted by Linda Crawford at 9:52 AM

Wow, what a lady! Linda this was an extraordinary piece of writing for a well deserved Belizean. Bravo for doing something so special for Ms. Elaine and her family. This was one time you put the belizean song to shame:No wait until the man is dead to tell him that he's good. In this case of course a woman. Keep up the good work!

Thanks very much Cherry! Indeed, she is an amazing woman.

I would like to thank you for reading, for commenting, and giving me the motivation to keep on existing.

We can all aspire to be as Ms.Elaine

Great Woman! Thanks for featuring this wonder woman of Belize. Her accomplishments are many. I am happy to read her story. I admire her and will strive to do well.

Linda you did a great job capturing the essence of Dame Elaine Middleton. Thanks for showcasing her.

Thanks Linda for the great article and spotlight on my mom. Thanks also for the wonderful work you do to keep Belizeans informed.

Many thanks for nominating me to the Special Envoy for women and children's Trailblazer Tuesday's feature on her Facebook page.
Many thanks for all your support and love over the years.