EARTH HOUR: DO YOUR PART FOR CLIMATE CHANGE 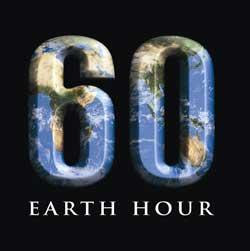 Tomorrow, March 27, 2010 at 8:30 p.m., 1 billion people in over 120 countries and 1700 municipalities will come together to make a change by turning off their lights for one hour-Earth Hour- to help save our planet.

I believe that each of us can make a positive impact to fight climate change. By coming together, we can send a message to the rest of the world showing that we, as Americans, care deeply about this issue and are working to find a solution to our escalating climate change.
Many of us are aware of the effect melting glaciers are having towards change and erratic weather patterns. Climate change is already impacting life on our planet; we must act now to alter the course of change.

Many cities around our planet have already committed to “Earth Hour” 2010. Some of the cities in the U.S. that will be participating are New York, San Francisco, Chicago, Los Angeles, Las Vegas, Dallas, Atlanta, Miami, Orlando, and Nashville. We will join cities of the world like London, Paris, Copenhagen, Moscow, Hong Kong, Beijing, Tel Aviv, and Dubai.

Earth Hour was first celebrated three years ago in Sydney, Australia. There 2.2 million people and thousands of businesses turned off their lights for one hour. In March 2008 an estimated 36 million Americans, with over 500 cities participated worldwide.

Earth Hour captured the lights going out at some of the world’s most iconic landmarks including the Golden Gate Bridge, Times Square, Empire State Building, The Eiffel Tower, and The Coliseum in Rome, Burj Khalifa and many more.

You can learn more at: