EXOTIC FRUITS AND VEGETABLES IN BELIZE

Mrs.Reye inspecting the kumquats at her farm in Belize
Giant Guavas wrapped in protective covering against insects
Under the Star Fruit Trees
For 15 years now, the Taiwanese community in Belize at mile 25 on the Western Highway has been farming and making this place like the Garden of Eden. They have been growing different types of fruits and vegetables that are new to Belize. Since the 1990’s, their agricultural crops have been increasingly geared towards the out-of-season, the colorful, the exotic and the just plain weird looking fruits and vegetables, but tasty.
Growing vegetables has become an art in the Taiwanese-Belizean community – based on choosing the right hybrid varieties, fertilizers and irrigation methods, selecting greenhouse covers designed for specific crops and employing innovative growing tools, harvest equipment and post-harvest treatments. In recent years farmers have also been seeking profitable market niches. Examples are a big increase in production of organic produce, as well as specialties like herbs and selected exotic fruits.
This ladies and gentlemen is Cerassie, it is a lot bigger than the ones we know in Belize. The smell and taste are the same, the leaves have the same shape, but much bigger.  Mrs. Reye gave me some stir fried cerassie over rice and it was a little bitter, but absolutely delicious and healthy.
Kumquats
Loaded Kumquat Tree
Giant Ju-Ju Plums-very delicious
Sugar Apple- the taste is similar to Custard Apple, a tropical fruit in Belize
Star Fruit-juicy and sweet
At the Belmopan Farmers Market in the month of May — in downtown — you can get a first peek at Pitahya or Dragon Fruit (Hylocereus undatus), a very attractive fruit from Southeast Asian that looks like a spiky orange and is known for its medicinal and nutritional properties.  Research at Chi-Nan University in Taiwan shows that Pitahya is very high in soluble fibers, which is excellent for Type 2 diabetics. The fruit comes from a cactus, the kind that climbs if you stick a stake in the ground and let it climb on it. Mrs. Reye told me that the fruit is simple to eat, just cut it in half and spoon out the soft interior.  She said it is catching on rapidly in Belize; they are growing a few acres for the local market. 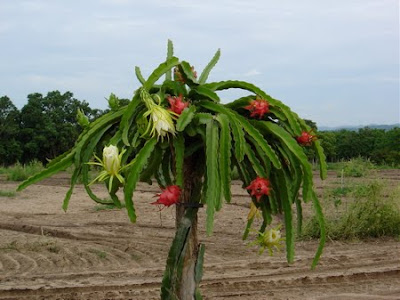 The Pitahya Plant in bloom-held up by stakes. It takes two years to bear fruits.
Pitahya Plant without stakes
Pitahya plant ready for stakes
Posted by Linda Crawford at 4:12 PM

Belize is truly a paradise, I love it.

Nice fruits! I want to go back to Belize the end of May or early June to eat some Belizean fruits.

How about coming to Belize and grow your own fruits...and vegetables and spices...all organically along the beautiful Belize River.
see www.carmelitabelize.com

Thanks Jerry: Will be coming to Belize very soon.....by the Belize River.