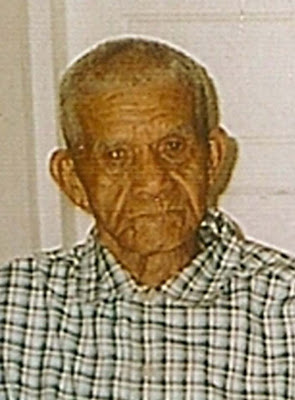 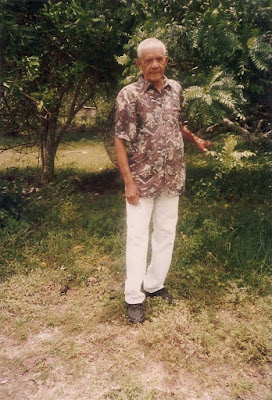 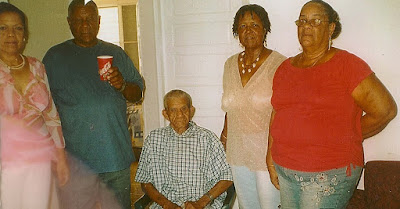 
THE OLDEST MAN LIVING TODAY IN CROOKED TREE VILLAGE AND POSSIBLY BELIZE was born in the final moments of 1904, as roosters in Revenge Mahogany and Logwood Works were crowing in the New Year. Mary Jones Rhaburn gave birth to her fifth child, and third son, the one chosen to bear his father’s name – James Rhaburn – on December 31, 1904.  In those days, the itinerant ministers (pastors) traveled circuits to attend the needs of the members of their congregation in their homes. It wasn’t until late in 1911 that one such minister visited the Rhaburn family in Revenge and had a mass christening service. On the 17th November, 1911 James, by then just short of his seventh birthday, was christened along with two younger siblings – Iris (3 years) and Mary (6 months) – and four cousins, namely Ada for his Uncle Jonathan Rhaburn who was born in February 1902 and Alberta (3 years), Benjamin (17 months) and Isaac (11 weeks) for his Uncle Elijah.

This is really interesting and good reading. Thanks Ruth for putting so much of your time and energy into this story. All I hope for since I have some of the Rhaburn genes in me that I can live a long and healthy life.

Thanks Linda for getting a very good article on your blog and for sharing it with the world.

Good luck to you Ruth with all of your history searching. May you find more information on your search. All I can say is good digging into our past. This is really a good insight for our future generation.

It's a great and informative post - great job you're doing.

I am Keishalyn Estell, daughter of Elswith Rhaburn Estell, and I too just wanted to say thanks for the article. Grampa is my love and I too look forward for his 108th Bday as he promised my sister Sue.

I wish people can hear his tales and see his smile and feel the sweetness he radiates to all. Dont get me wrong at 106 yrs old, gramps can surely put you in your place if you come the wrong way lololo. He is so funny and so loved. Thanks again Keishalyn

Keishalyn, as you know by now, I agree with you about your grampa, who is my Uncle James. He is so very special and I'm happy Linda provided us with this forum to share him with others.

Now all we have to do is make the most of the gift of time God has given us in him.

Thank you Ruth and all my visitors for your support. I hope I can continue to add relevant news about our community.

This is wonderful! I had always heard interesting stories about "Grandad James" from my very good friend Sue. I hope his family spend quality time with him as much as possible.

This is good work, keep it up!

This is great; the whole thing, the blog, the stories, the Crooked Tree fan site. I am a Cultural Anthropologist who lived in Crooked Tree between 1993-1995, and have been working on putting together some of the history of Crooked Tree...I collected a LOT of family trees during that time, and also spent quite a bit of time in the National Archives. I am very slowly working on getting some of my writing on Crooked Tree, and rural creole (when I spend time in Belize now, it is in Lemonal with my husband and his family) villages in this area of Belize. If anyone would be interested in reading, commenting on any of this, please let me know.
I have a very deep love for Crooked Tree and Lemonal.

Today it saddens my heart to write that the sweet smiling grampa is no longer with us. He passed away on March 21 a Sunday at 7am. He was laid to rest on March 26th in his home Village of Crooked Tree.

Gramps I love you and I miss you everyday more and more!!