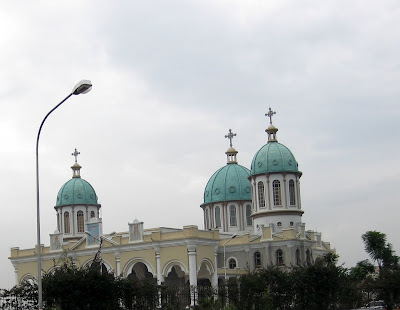 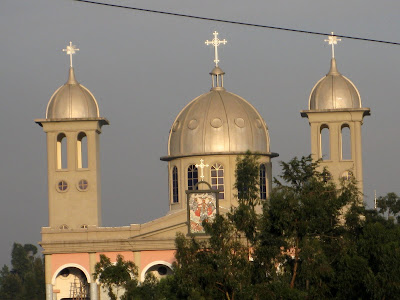 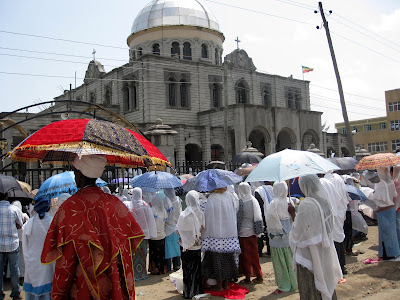 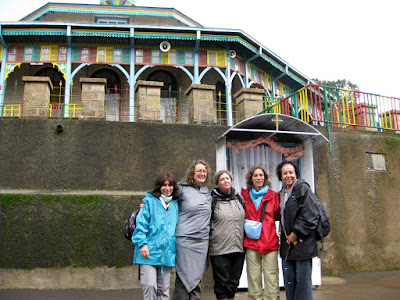 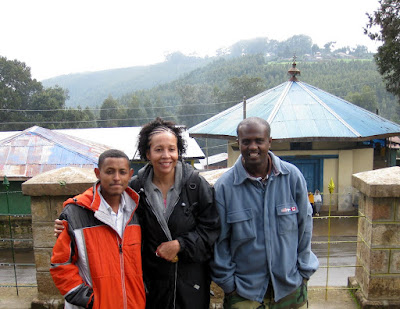 Ethiopia is one of the oldest nations in Africa. It still follows the ancient Julian calendar, so Ethiopians celebrate Christmas on January 7. The Ethiopian Orthodox Church's celebration of Christ's birth is called Ganna. It is a day when families attend church.


The day before Ganna, people fast all day. The next morning at dawn, everyone dresses in white. Most Ethiopians don a traditional shamma, a thin, white cotton wrap with brightly colored stripes across the ends. The shamma is worn somewhat like a toga. Urban Ethiopians might put on white Western garb. Then everyone goes to the early mass at four o'clock in the morning. In a celebration that takes place several days later, the priests will dress in turbans and red and white robes as they carry beautifully embroidered fringed umbrellas.


Most Ethiopians who live outside the modern capital city, Addis Ababa, live in round mud-plastered houses with cone-shaped roofs of thatched straw. In areas where stone is plentiful, the houses may be rectangular stone houses. The churches in Ethiopia echo the shape of the houses. In many parts of the country there are ancient churches carved out of solid volcanic rock. Modern churches are built in three concentric circles.


In a modern church, the choir assembles in the outer circle. Each person entering the church is given a candle. The congregation walks around the church three times in a solemn procession, holding the flickering candles. Then they gather in the second circle to stand throughout the long mass, with the men and boys separated from the women and girls. The center circle is the holiest space in the church, where the priest serves Holy Communion.


Around the time of Ganna, the men and boys play a game that is also called Ganna. It is somewhat like hockey, played with a curved stick and a round wooden ball.


The foods enjoyed during the Christmas season include wat, a thick, spicy stew of meat, vegetables, and sometimes eggs as well. The wat is served from a beautifully decorated watertight basket onto a "plate" of injera, which is flat sourdough bread. Pieces of injera are used as an edible spoon to scoop up the wat.


Twelve days after Ganna, on January 19, Ethiopians begin the three-day celebration called Timkat, which commemorates the baptism of Christ. The children walk to church services in a procession. They wear the crowns and robes of the church youth groups they belong to. The grown-ups wear the shamma. The priests will now wear their red and white robes and carry embroidered fringed umbrellas.


The music of Ethiopian instruments makes the Timkat procession a very festive event. The sistrum is a percussion instrument with tinkling metal disks. A long, T-shaped prayer stick called a makamiya taps out the walking beat and also serves as a support for the priest during the long church service that follows. Church officials called dabtaras study hard to learn the musical chants, melekets, for the ceremony.


Ethiopian men play another sport called yeferas guks. They ride on horseback and throw ceremonial lances at each other.


Ganna and Timkat are not occasions for giving gifts in Ethiopia. If a child receives any gift at all, it is usually a small gift of clothing. Religious observances, feasting, and games are the focus of the season.

All Photos by Linda

Posted by Linda Crawford at 5:57 PM