My first night in was met without electricity.


Due to the shortage of power, electricity is rationed throughout the country by the Ethiopian Government to save energy.
In and other large cities electricity is a huge problem; the power is turned off in a grid like pattern so that different areas of the cities and towns loose power at different hours and on different days. In small towns and villages the power can be turned off to the entire area for a day or two. 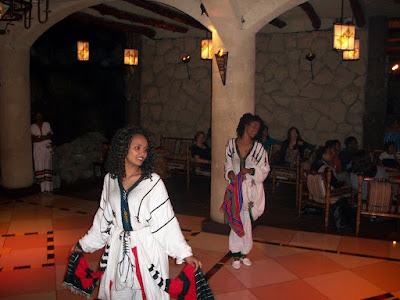 ENTERTAINERS IN A RESTAURANT
Currently in , the electricity is turned off between 7 a.m. and 8:00 p.m. every day in a grid pattern and is often kept off until as late as 10:00 p.m. The rationing schedule is not made available ahead of time so people can plan; it simply just turns off without warning. This is a huge problem as computers; copying machines and basic light to work with are shut off daily. Because of power shortage, Ethiopians are spending about 100 million birr a month in fuel cost for generators to supplement the monthly power. Generators are expensive, and while some businesses can afford them, the government offices and agencies cannot.

Many companies and restaurants suffer great financial losses due to the frequent loss of power and interruption to their work. Power rationing affects all but the very elite. Even large factories and hotels are not exempt from power rationing. The effects is felt by millions in , shopkeepers sometimes operate in the dark. Millions cannot keep their food fresh without electricity, especially families trying to run a household.

Electricity in is primarily provided by hydroelectric dams. The government is building new plants to meet the demand. A 44 meter arch dam, the biggest of its kind in , is set to generate 300 MW of power by 2010. The Ethiopian Electric and Power Corporation have started production of 75MW as a test trial. The almost 3 billion birr project is expected to solve the current severe power shortage hammering the economy.

For now, the lights are on and the power is running, but the people of would all agree that the severe electricity shortage has become a constant source of public and government concern.

Posted by Linda Crawford at 9:53 AM