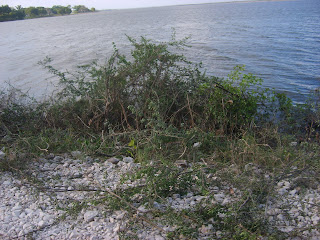 Clearing  the sides of the causeway
All photos by Jane Crawford, DVM 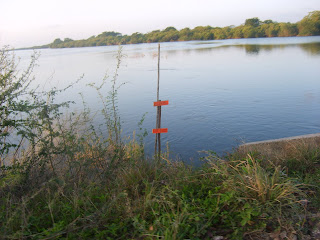 Survey markers for widening of causeway

After the great flood of October 2008, the people of Crooked Tree Village will be getting some much needed attention from the Government of Belize.

The Belize Ministry of Works is officially set to begin work on Tuesday, February 24, 2009 on the upgrading of the Crooked Tree Village Road. A contract has been awarded to Benson Ramclam, CEO of Triple B Heavy Equipment Company.

The project is being funded entirely by the Government of Belize and will be in two phases. The first phase of construction will cost approximately BZ$225,000 and should be completed within a six week construction period.

The civil works will consist of the widening of the road from 18 feet to maximum 30 feet wide. The causeway will be elevated to approximately 4 feet and up to 5 feet in some areas.

Chief Engineer, Mr. Lennox Bradley said that at the end of the first phase, they will have to allow for settlement and water pressure to dissipate before the second phase can begin. Also, he said the money for the second phase is not yet allocated, but is expected to be in the budget for the next fiscal year beginning on April 1, 2009.

Hon. Edmond “Clear the Land” Castro said the upgrading will be starting at the entrance of the Village and approximately 1.5 miles across the causeway.

This timeframe for completion aligns for the up-coming Cashew Festival on the first weekend in May.

Posted by Linda Crawford at 4:06 PM

This is good news for our Village. It is nice to see that this Government is working to help our Village and not making empty promises to the people so that they can get elected as with the previous party.

Hon. Castro is really coming through for Crooked Tree Village. Way to go.

Crooked Tree has come a long way. I used to go there quite often about 30 years ago. I am looking forward to visiting in April.
PM

THANK YOU, THIS IS GOOD NEWS FOR CROOKED TREE, AND GO BRILLIANT FOR 2009!!!