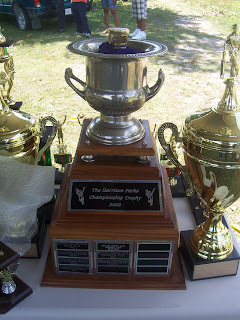 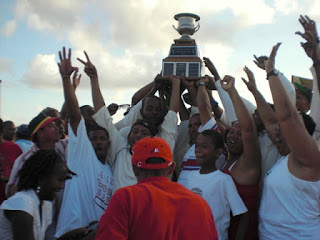 According to Elihue Bonner, President of the Belize District Cricket Association, the winners of last Saturday’s game and champions of the 2008 cricket competition, Brilliant Cricket Club of Crooked Tree Village will get to keep the Harrison Parks Championship Trophy. Since this was Brilliant’s third consecutive championship and the first team ever to register three championships, keeps the trophy forever.
In the seven years that the Harrison Parks Championship Trophy has been in circulation, four different cricket club names have been etched on its beautiful face. Those clubs are Sunrise of Lords Bank, who won in 2002; Wicked Eleven of Flowers Bank, who were champs in 2003 and 2004; Excellence of Double Head Cabbage, who won in 2005; and Brilliant of Crooked Tree, who won in 2006, 2007 and 2008.
The trophy will now have a permanent home with head coach and owner, Eustace “Tes” Dawson of Crooked Tree Village.
GO, BRILLIANT, GO!!!
Posted by Linda Crawford at 10:08 PM