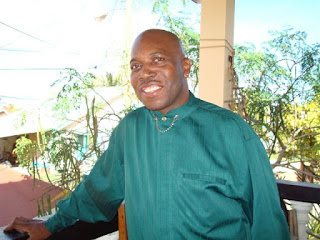 Christmas Eve 2006 was a night to remember. I was sitting in a small bar in Barranco Village, Belize, when none other than Andy Palacio walked in. Andy, Belize's most famous musician on the international scene was in town to celebrate the holidays with his mother. That's the kind of guy Andy was. Sadly, it was the last time I saw him alive. One year ago, on January 19th 2008, Andy Palacio passed away.
Growing up as a member of the Garifuna community, Andy began to witness the noble heritage of his culture slipping away. The Garifuna are the result of the fusion of West African slaves that were shipwrecked on the Caribbean island of St. Vincent in the 1600's and the indigenous Carib/Arawak Indians who at that time inhabited the islands of the Eastern Caribbean. After resisting colonial domination, the Garifuna were eventually forcibly removed from St. Vincent by the British, and transported to the island of Roatan off the coast of Central America where they dispersed, settling in Nicaragua, Honduras, Belize and Guatemala. Andy was proud of his heritage, and was committed to preserving his culture through music.
In 2007, Andy's album "Watina" was released to international acclaim. The album, in the Garifuna language, was performed with a group of local musicians called "The Garifuna Collective" and the "Umalali Singers". The album was eventually shortlisted for the BBC3 Awards for World Music. Tragically, Andy died just one year ago and was posthumously given the award.
"Music being the thing that I love most, I decided to use music as a medium for cultural presentation." That was Andy's essence.
A belorio will take place in Barranco Village, Belize on Saturday, the 24th of January, 2009. The belorio consists of prayers intended to assist the spirit of the departed on its way to Seiri, the Garifuna after life, as well as to allow family and friends who are left behind to go on in the world of the living.
Garifuna Song

My name has been raining, my child,
The thunder has rolled, the world has rumbled
With my name, my child.
She who has no sister is poor,
She who had no mother is poor,
Death is responsible,
Death took my male ancestor from me;
(Otherwise), I would not be crying.

Posted by Linda Crawford at 3:38 PM

This article about Andy Palacio was real interesting and educational for me. It shows me how much that I don't know about the cultures of the many different races in our country. We have a diverse group of people living in Belize. It was nice to read this article.