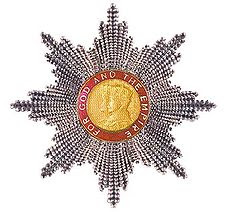 The MOST EXCELLENT ORDER OF THE BRITISH EMPIRE is a British order of chivalry established on June 4, 1917 by King George V. The order includes five classes in civil and military division; in decreasing order of seniority, these are:
Knight Grand Cross (GBE) or Dame Grand Cross (GBE)
Knight Commander (KBE) or Dame Commander (DBE)
Commander (CBE)
Officer (OBE)
Member (MBE)
Only the two highest ranks entail admission into knighthood, an honor allowing the recipient to use the title “SIR” (male) or “DAME (female) before their first name. Honorary knighthoods, given to individual who are not nationals of a realm where Queen Elizabeth II is Head of State, permit usage of the honor as a post-nominal but not as a title before their name. These recipients are classified as honorary members of the Order they receive, and do not contribute to the numbers restricted to that Order as full members do.


There is also a related British Empire Medal, whose recipients are not members of the Order, but who are nonetheless affiliated with the Order. The British Empire Medal has not been used in the United Kingdom or its dependencies since 1993, but is still used by the Cook Islands and by some other Commonwealth nations.


The Order’s motto is “For God and the Empire”. It is the most junior of the British orders of chivalry and has more members than any other.


As part of the Queen’s New Year’s honors for 2009, four Belizeans have been honored this year.


Floridalba Contreras: Order of the British Empire (OBE) for her service to education and the community.


June Huesner: Member of the British Empire (MBE) for service to the public, community and commerce.

Celi McCorkle: Member of the British Empire (MBE) for service to the public, community and commerce.


Honorees were appointed on the recommendations of the Governor General, Sir Colville Young. The presentation of the insignias will be held later at the Belize House in Belize City.